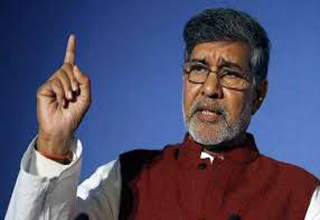 Mumbai, Sep 27 (PTI): Nobel laureate Kailash Satyarthi today said that dedicated courts should be set up in every district of the country to hear cases related to crimes against children.
“Sexual abuse of children is a moral epidemic and we have waged a war to root out this epidemic from society. I appeal all to come forward and protect the rights of every child in our country,” Satyarthi said here, visiting the city as part of his ‘Bharat Yatra’ campaign for child safety.
“I appeal the government to set up children-specific courts in every district of the country where cases related to crimes against children will be decided in a time-bound manner, as in fast-track courts,” Satyarthi said.
The Bharat Yatra campaign started in Kanyakumari on September 11. It will culminate in Delhi on October 16.
“I received overwhelming response from all sections of the society…Right from ordinary people to politicians, judiciary, corporate world, celebrities….so many people have come forward and extended their support.
“Even Rajnath Singh, union Home Minister, assured me (of support) and underlined the need to pass an anti-trafficking law as soon as possible,” he said.
Satyarthi and his 120-member team today travelled by Mumbai Metro from Versova to Ghatkopar to sensitise people about child abuse.
A major objective of the yatra is to create pressure on the government for a more effective and stringent law to punish child abusers, he said.
Satyarthi also rued the fact that in our country the rape victim faces a social stigma instead of the rapist.
“A most upsetting thing in our society is that when a girl is raped, it is believed that her modesty has been ravaged and nobody will marry her and then she starts facing a trauma. I fail to understand what’s the girl’s fault….the man who raped her should carry a social stigma and should be boycotted,” he said.
Talking about the message of Bharat Yatra, ‘Make India safe for its children’, he said, “Everyday 40 children are raped and 48 children are sexually abused, besides every six minutes a child goes missing.”
Whoever notices or gets information about crime against children should inform police by dialling 100 or 1098 “to save not only the child’s future but the country’s future also,” he said.

Budget will have ‘plan of action’ on economy: Javadekar