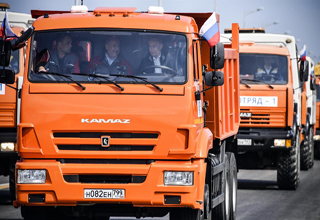 MOSCOW, May 15 (AP): Russian President Vladimir Putin drove a large construction truck Tuesday to road test the much-anticipated bridge linking southern Russia and the Crimean peninsula that Russia annexed from Ukraine in 2014.
The 19-kilometer (11.8-mile) bridge, which took two years to build and cost $3.6 billion is Putin’s project to show that Crimea has joined Russia for good. Transportation links to Crimea deteriorated after both the Ukrainian and Russian militaries set up checkpoints into the peninsula and trains crossing the Ukrainian mainland were canceled.
Putin traveled to southern Russia to inspect the construction site and to lead the opening ceremony for the bridge. After receiving a briefing from the construction firm, owned by his childhood friend Arkady Rotenberg, Putin jumped into an orange Kamaz truck with two engineers to lead several dozen trucks across the span.
“Let’s hit the road!” he said in the cabin before driving off.
Putin annexed Crimea in March 2014 following a hastily called local vote. The European Union and the United States imposed sanctions on Russia for the move. Only a handful of Russia’s staunchest allies like Venezuela and Syria have recognized Crimea as part of Russia.
TV host Andrei Kondrashov, who was chairman of Putin’s victorious re-election campaign, this year described the bridge as ‘one more reason for Russians to be proud.’
Tuesday’s test drive took a little under 20 minutes and was covered live by Russian state television. Reporters and cameras were stationed at several spots along the route. One reporter hailed the bridge as an example of ‘heroism of the workers.’
The Ukrainian government reacted to the opening with anger. President Petro Poroshenko lambasted the bridge as ‘yet another piece of evidence of the Kremlin ignoring international law’ and ‘an attempt to legitimize the temporary occupation of the Crimean peninsula.

Death toll in China’s coronavirus goes up to 9; total cases rise to 440