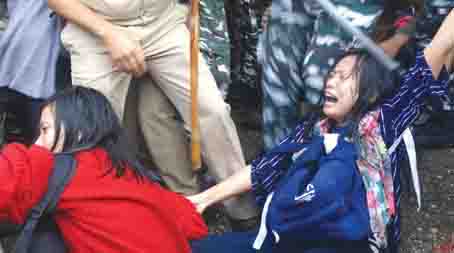 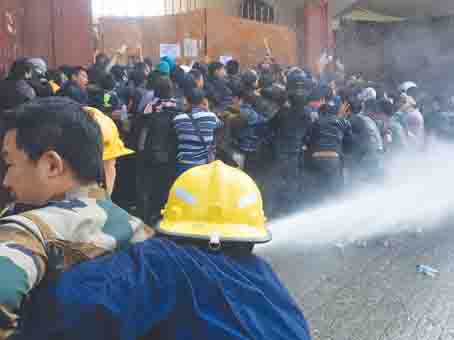 The qualified candidates had been seeking extension of the examination date till the court gives its final verdict on the writ petition filed by the aggrieved candidates.
During the morning session of the examination, the protesting candidates outside Kingcup Public School shouted slogans against the APPSC for its decision to hold the examination “merely a day after the court vacated the stay order.”
The candidates said they were prepared for the examination but were under tremendous mental stress for months with the court yet to give a clear-cut judgment on the writ petition filed by the aggrieved candidates.
In the meantime, some candidates arrived to appear for the examination at the school centre and sat for the examination. Many others were convinced by the protesting candidates to support their cause, while some refrained from entering the exam centre, saying the tense environment was not right to appear for the exam.
The protesting candidates later gathered and sat down outside the main entry gate of the school, chanting slogans all the while. When the magistrate and security personnel could not convince them to move from the area and allow the willing candidates to enter, they hosed down the protestors with a water cannon.
Later, on orders, the security personnel pulled and dragged out protestors onto the street, while many female candidates could be seen wailing to let them protest peacefully. Some of the security personnel mildly lathi-charged those who were being resilient.
Superintendent of Police M Harsha Vardhan later managed to hold a dialogue with the candidates, and convinced them to either disperse or be under court arrest to avoid any criminal charges.
“We are sensitive to their concerns, but they must also understand that they should not directly or indirectly obstruct the exam process,” the SP said.
He informed that 105 protestors were briefly detained and released later.
However, hundreds again gathered outside the APPSC office in the afternoon session and protested against the commission.
Speaking to media persons after the afternoon session, several candidates said they were willing to appear for the general studies papers on Sunday, while several others said they were adversely affected by the “unhealthy atmosphere” and would not be appearing for the exams following.
One of the candidates told reporters that she and her friends, apart from parental pressure, were also worried that the commission would declare the results if they did not appear for the examination and therefore attended both the sessions.
However, after witnessing the situation, she said, “I feel I shouldn’t have come. If the exams are conducted tomorrow, I am definitely not giving them. Our friends were manhandled, lathi-charged, doused with water cannons. This is very painful for us. We are students, not criminals,” she said.
Seeking postponement of the examination on reasons that the examination was not fair for all, she said “there should be full clarity on when the examination will be held, and no space should be left for doubt among the candidates.”
Another candidate who appeared for the examination said the commission could have avoided all the chaos if it had sought an amicable solution, and opined that the examination should be called off till the time the issue is amicably resolved.
On whether the situation was suitable to continue with all the examinations, APPSC Secretary Taru Talo said the commission tried to make the atmosphere as conducive as possible by engaging the police and paramilitary to provide security to the candidates appearing for the exams.
He said the atmosphere was the same for all the candidates, and that it depended on the candidates how well-prepared they were for the exams.
The commission claimed that out of the 1,339 candidates who qualified for the mains, 900 appeared for the examination at both the centres combined. It refrained from divulging more on the numbers.
However, other officials at the centres claimed that a total of 899 candidates appeared for the exam at both centres. Reportedly, 188 candidates out of the 899 (at the commission centre) refrained from appearing in the afternoon session.
The data available indicates that out of 1,339 qualified candidates, 711 appeared for the examination. The 188 candidates later joined the remaining 440 candidates who did not attend either of the sessions on Saturday.
Data on the number of candidates that appeared in the afternoon session at the school centre could not be collected.
On 9 November, the Itanagar permanent bench of the Gauhati High Court vacated the stay order of 12 October, 2018, resultantly removing the stay over holding the mains examination.
However, the HC said the result of the examination would be subject to the final outcome of the writ petition filed by the aggrieved candidates, which is currently sub-judice before the court.
The next joint hearing is scheduled for 14 November.