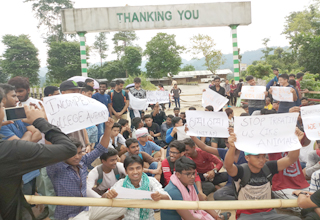 Staff Reporter
ITANAGAR, Oct 9: The 1st year students of National Institute of Technology (NIT) Jote are staging an indefinite protest against the college authorities demanding basic amenities.
On October 5, the NIT authorities reportedly shifted the 1st year students, comprising around 150 students to the permanent campus site at Jote from its temporary campus in Yupia, with the assurance that all the basic amenities have been put in place.
However, to the horror of the students, the situation is completely different at ground.
“Everything is a mess. At present, we are staying in the academic block of Chemical and Mechanical Engineering Department. The authority told us that the hostel will be ready within three months, but looking at the speed of work, it may take years. There are no bathroom facilities, while the chemistry laboratory has been turned into a makeshift kitchen. At least eight students are forced to share a tight-spaced room”, said a student.
The students also highlighted the plight of poor connectivity and said that there were no proper mobile or internet services.
Apart from absence of basic amenities within the campus, the Itanagar-Jote road is in a horrific condition.
The 35 KM stretch of journey takes around two hours to cover and majority of students in NIT are from outside the state.
“Students are deeply worried and are feeling cheated by the NIT authorities. We submitted a five-point representation immediately after shifting to the new campus to the Dean In-charge of students affairs, seeking proper bathroom facilities, hostel room, mobile/ internet service, etc”, the student went on to claim, but lamented that the authorities are yet to respond.
“If they can’t fulfil our demands, they should shift us back to Yupia. Our mid-semester exam has been postponed for several months due to this whole mess,” another student shared.
The foundation stone of the prestigious Institute was laid on 10 February, 2013 at Jote by the then Union Human Resources Development Minister M M Pallam Raju. The actual construction works began in 2012 with an estimated fund of Rs 800 crore and was supposed to be completed by 2015.
The institute is currently functioning from temporary campus located Yupia. At present, 2nd, 3rd, 4th year and M Tech students are based in Yupia.
In December 2016, Chief Minister Pema Khandu, while inspecting the construction site of NIT, Jote sought suggestions from the officials of the institute and the construction agency, Hindustan Prefab Limited, on how the state government could help put the ongoing works on fast track.
Observing that the present road connecting Jote with Itanagar is a village road, the CM had assured to build a two-lane highway over it to provide easy access. However, none of the promises made by the CM have been fulfilled and students are feeling let down by the state government.
“The Ministry of Human Resource Development (MHRD) and state government are playing with our lives by not properly looking into the problems confronting NIT. It is sad that the state government is failing to address concerns of the premier technical institute of Arunachal,” said a frustrated student.
However, when contacted, the NIT authorities claimed that mobile and internet services have already started at Jote campus. They also added that all the demands put forward by the students have been assured to be fulfilled within the next few days.
“We shifted to the permanent campus with a lot of difficulties. There is immense pressure on us from the MHRD to shift to the permanent campus and we have no choice but to abide by the order of the Ministry. We understand that there are some issues, but if we are given time, everything will be resolved,” stated an NIT official.