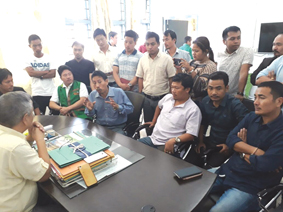 Staff Reporter
ITANAGAR, Oct 26: A day after the list of eligible candidates for the Arunachal Pradesh Public Service Combined Competitive (Preliminary) Examinations (APPSCCE) was released on the Arunachal Pradesh Public Service Commission (APPSC) website, the All Arunachal Pradesh Students’ Union (AAPSU) demanded immediate review and removal of names of four Chakma applicants from the list of eligible candidates.
Reportedly, there are three Chakma applicants who have applied for the preliminary examinations scheduled for November 26, 2017, through the general category, two of which are from Namsai and one from Changlang. The fourth candidate has applied through the Scheduled Tribe category from Papum Pare district.
Strongly disapproving the reported candidature of four Chakma applicants in the list, a delegation of the AAPSU met APPSC Chairman Tajom Taloh on Thursday and demanded inquiry and disciplinary action against the officials responsible for enlisting the names of the Chakma applicants in the eligible list within a week’s time.
The Chairman on his part assured the AAPSU that the matter would be reviewed and if any anomalies are found, they would be rectified.
Condemning the enlistment in the eligible candidates’ list, AAPSU President Hawa Bagang said that this issue has touched the sentiments of the indigenous people of Arunachal Pradesh, and it would deprive the youth of the state from getting job opportunities.
“We will continue to fight against the refugee issue for as long as it takes”, he said.
However, a few AAPSU members, miffed with the issue of refugees, broke the windowpanes installed in the entry doors of the Commission on their way out.
Speaking to reporters, the APPSC Chairman clarified that the documents of the candidates are not scrutinized for the preliminary examinations, and the machine reads the OMR sheet.
The attested documents are checked once candidates qualify for the Mains examinations and the original documents are finally scrutinized during the personality test/ interview session.
He assured that the matter would be reviewed and if there are mistakes, the Commission would rectify them, and since admission to any examination is always provisional, it can be cancelled at any stage of the examination.
He also affirmed that only Arunachal Pradesh Scheduled Tribes (APST) can apply under the ST quota and no one else.
Later in the day, the AAPSU also submitted a memorandum to the Chief Minister seeking immediate deletion of Chakma candidates from the ensuing APPSCC Examinations list within seven day’s time.
It also sought disciplinary action against officers of the APPSC for enlisting the names of the candidates in the list, besides demanding that the application forms and other relevant documents of the four Chakma candidates be furnished immediately.
Meanwhile, the Arunachal law Students’ Union has sought immediate resignation of the APPSC Chairman and its Board members for qualifying Chakmas to appear under the APST quota.
It further urged the authorities to extend the scheduled examination as it contradicts with semester examinations of various colleges.
At least 24,000 applications came for the APPSCCE, of which, a little over 22, 000 applicants made it to the eligible list of candidates for the preliminary examinations which are scheduled to be held on November 26.
The list of eligible candidates was made available on the Commission’s website from October 25.