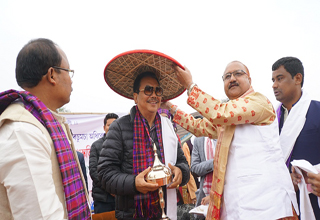 BORDUMSA, Feb 2: Deputy Chief Minister Chowna Mein on Friday flagged off the colourful sangskritik subhajatra (traditional cultural procession) of the 74th Asom Sahitya Sabha (ASS), consisting of numerous tribes and communities from Assam and Arunachal, which was held for the first time at the Singpho Heritage Centre here in Changlang district.
“Cultural heritage is our identity and we should strive to protect it and make efforts for its enrichment. Cultural exchanges play a pivotal role in developing sense of brotherhood amongst various ethnic groups and communities,” Mein said.
Lauding the efforts of the apex literary body of the Northeast, the ASS, for organizing the historic event in Arunachal Pradesh, Mein said organizing such historic biennial conference in border areas like Bordumsa would be a step forward in bringing the rich cultural heritage of the hills and the plains together.
“Such events will help promote a strong sense of fraternity and cultural affiliation, enhancing mutual trust and assistance among the border people,” he said.
Offering tributes to the renowned personalities of the ASS who contributed immensely towards the enrichment of the Assamese language, literature and culture, Mein said that since its inception the organization has worked for the cause of Assamese literature, and that its branches in Arunachal have also immensely contributed towards strengthening the time-tested bonds of diverse societies, cultures, and languages.
He recalled the contributions made by some of the finest novelists and writers from the state, like Lummer Dai, Yeshe Dorjee Thongchi, Tokong Pertin and Kengsam Kenglang, who brought the pristine beauty and struggles of life in the hills in the form of Assamese literature.
Mein said the history of Arunachal cannot be separated from the history of Assam “as the roots of our journey in the development process in this hilly terrain land began with the Assamese language.”
Newly-elected ASS president Parmananda Rajbongchi, Margherita (Assam) MLA Bhaskar Sharma, Assam MP Rameshwar Teli, and Namsai DC RK Sharma, along with a host of poets, writers, playwrights and eminent scholars from Assam and Arunachal were present at the event.
Later, Mein gave away the certificates of appreciation and mementoes to the participants of the youth conclave.
Mein also inaugurated Aruna Shiksa Niketan School at Jona III, in the presence of Namsai MLA Chau Zingnu Namchoom, Mahabodhi Monastery Abbot Panyaloka Thero and others.
Later in the evening, Mein, Namchoom and otheres participated in the Poi Buddha maha diksha samorah at Jona III village in Namsai district.
The two-day conference was organized by the United Bhogamur Buddhist Welfare Society (UBBWS), where people from different walks of life from various villages from Namsai and nearby districts participated enthusiastically.
The Buddha maha diksha was given by the Arunachal University of Studies Prof Pragyasila Bhikkhu.
Mein lauded the praiseworthy efforts of the Tai Ahom community of Juna III, who despite facing many hardships is maintaining the sanctity of the Buddhist temple constructed in a temporary makeshift place in the village.
He announced that he would provide all necessary support for constructing a proper Buddhist temple in the area.
Namchoom appealed to the deputy chief minister to provide necessary fund for early repair and maintenance of the PMGSY road in the area, which is in a dilapidated condition.
Mein, Namchoom and Sharma also inspected the under-construction bridge over the Jenthu river, and the construction of the Namsai-Jaipur road and the New Jenthu to Jona-III road.