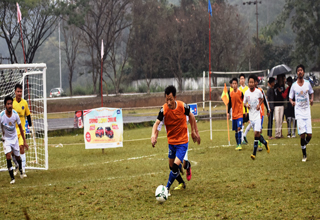 RONO HILLS, Mar 3: The 3rd Rono Hills Futsal Premier League-2018 being organized by the Department of Physical Education, Rajiv Gandhi University began at the Rono Hills ground here on Friday last.
Joint Registrar of RGU, Dr David Pertin, who inaugurated the tournament, emphasized on the importance of healthy living and need for fitness. He encouraged the gathering to imbibe more discipline in one’s conduct and way of life.
Earlier, the gathering also observed a minute of silence as a mark of respect to the departed soul of football referee, late Taba Tania (Nakam).
The opening match between 7 Star and Arunachal Warriors ended in a 2-2 draw.
Tampolo Pul of 7 Star was declared the ‘man of the match’, while in the second match, Litum Noshi was adjudged as man of the match where his team FC Maselo Zinu outplayed CR-7 by three goals to nil.
In the third match of the day, the Officers Club RGU was hammered with 10 goals to nil by wild card entrants, Rono Warriors. Bengia Aku of Rono Warriors was the ‘man of the match’.
The league is organized by the RGU under the aegis of its Physical Education department and is supported by various other companies.
All the seven teams with their own local franchises and owners saw biddings of players with maximum seed money of 2000 each franchise. The minimum base amount of each player was kept at Rs 50.
Yowa Takam of the department of Physical Education became the highest paid player purchased for Rs 1500 by Rono Warriors franchise.
The league is unique as it gives platform for professionalism ethics right from playing on the ground and off the ground by the players; dress codes of managers and coaches of the teams to the dedication and commitments of match officials and decorum of the ground and its surrounding.
The finals of the league will be held on 4 March next.