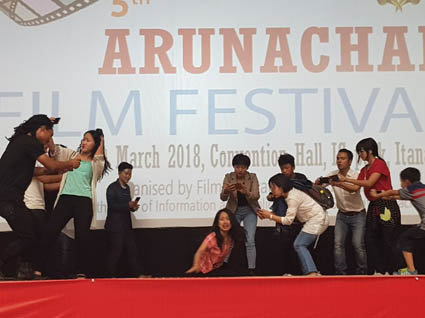 Staff Reporter
ITANAGAR, Mar 22: The 5th edition of the Arunachal Film Festival opened its doors to a whole new generation of filmmakers and artistes from across the state and others, on its inaugural day at the Dorjee Khandu Convention Hall, here on Thursday.
The first day of the three-day event saw a remarkable theatrical performance from artistes who had attended the three-day workshop from 20 to 22 March.
Directed by noted actors from the state, Riken Ngomle and Tai Tugung, the play was a satirical take on how social media has taken over our lives and will probably continue for a long time to come.
The state’s first ever poetry based web series, The Vivid Project, under The Wildflower Production was also screened on the occasion. Six poets gave vivid imagery to their words under the direction of Karry Padu and received much accolades from the audience.
A documentary on the Torgya festival, directed by Radhe Tajung and produced by the IPR department was also screened.
The feature film, ‘Gangs of Northeast’, which has artistes from all across the Northeast, was also screened for audiences. Director Rupak Gogoi was also present on the occasion.
Earlier, Education Minister Honchun Ngandam formally inaugurated the three-day festival, being organized by the Film Federation of Arunachal in collaboration with the department of Information and Public Relations.
In his inaugural address, Ngandam urged upon the filmmakers and the creative artistes to strive hard to produce more films depicting myriad issues confronting the state and its people. He exhorted the participants to educate the common masses through songs, films, books, etc.
The festival director, Radhe Tajung threw light on the progress of Arunachal Film and Television Institute under the famed Satyajit Ray Film and Television Institute, Kolkata. He also highlighted the categories of films to be screened for competition during the festival.
Dean of Satyajit Ray Film and Television Institute, Kolkata, Ashoke Vishwanathan hoped that the festival would showcase the plurality of India, adding that cinema was synonymous with drama and emotion.
He further told the audience that only education and culture could save a place from decay.
Earlier, Film Federation of Arunachal vice president, Ashok Sonam said that the number of films and film artistes is the highest this year, and hoped that with the help and cooperation of the state government the film industry in the state would make a rapid stride.
Ngandam and Ashok Swaminathan gave away certificates to the young artistes who had participated in the three-day workshop on acting.
T Gungte, organizing secretary felicitated the prominent personalities of the state who had created a niche for themselves in their chosen fields. (With inputs from DIPR)