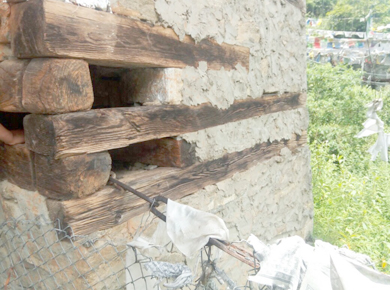 [ Lham Tsering ]
TAWANG, Jul 10: In a shocking incident, part of a centuries old iron chain from the historic Chakzham Bridge here has been stolen by miscreants.
The incident came to light on 8 July. It is suspected that the miscreants took away the centuries-old chain on the night of 7 July, according to the caretaker of the bridge.
“Approximately 15 metres of it has been snapped and stolen,” said Leki Tsering, a resident of Mukto village, who had reached the bridge for inspection along with a companion.
According to wise men of the region, the iron chain was worth Rs 4 to 5 crore.
The GBs and former panchayat members of Mukto, Mirba and Gomkyelling have filed a complaint at the Jang police station. They also wrote to the deputy commissioner, informing him of the theft.
This is not the first time that chains have been stolen from the 15th-16th century bridge. A similar theft case had been reported in 2015, following which compliants were lodged at the Tawang and Jang police stations.
The bridge over the Tawang Chu river is 25 km from the town, and is highly revered for its religious significance. The bridge was built by Tangton Gyalpo, a disciple of the first Dalai Lama, popularly known as Lama Chag-Zam Wangpo (1385-1464).
The bridge, which exemplifies finest metallurgy, was built over the Tawang Chu river during the 15th-16th century, and makes a passage through Kitpi and Mukto.
Lama Chakzham Wangpo was an architect, philosopher and iron chain bridge builder. He is credited to have built more than 100 iron bridges all over the Himalayan region. (Tawang Vigilance)