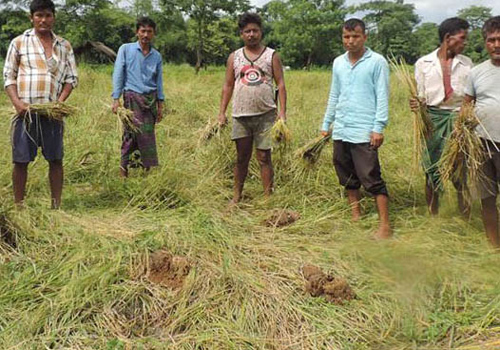 Correspondent
PASIGHAT, Sep 10: A herd of wild elephants reportedly damaged several acres of standing paddy crop in rural areas of Mebo subdivision in East Siang district in the last two days.
The area is an elephant corridor.
The number of elephants has been counted at 200, and the herd reportedly came from Dibru Saikhowa National Park, crossing the Siang/Brahmaputra near the Poba reserve forest.
There is an elephant corridor linking the national park, the Daying Ering Memorial Wildlife Sanctuary (DEMWS), and the reserve forest falling under the Pasighat forest division.
The elephants, which reportedly came from nearby DEMWS in search of food, have destroyed pre-harvest paddy and fruit plants at Mer village in Mebo subdivision.
Local villagers alleged that even after they reported about the destruction caused by the elephants, the wildlife & forests department officials have not yet taken any effective measures to drive away the herd from the area.
“We are helplessly watching the elephants destroy the crop as the herd comes out in search of food during night hours and feed on paddy.
We are trying to drive away the hungry elephants from the fields but our efforts go in vain,” said Vinode Perme, who escaped an attack by the elephants.
Wildlife officials in Pasighat have visited the affected area and taken stock of the loss and the crop damage caused by the elephants.
The foresters are trying their best to chase the elephants away from the area. Urging the local villagers not to harm the elephants, wildlife officials have assured of action from the state.