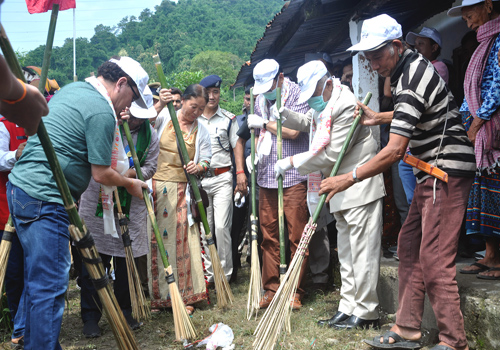 ITANAGAR, Sep 15: Governor BD Mishra launched the fortnight-long cleanliness movement, ‘Swachhata Hi Seva’, across the state from Mani village, 35 km from here in Papum Pare district, on Saturday.
Addressing the public, the governor commended the people for their contributions in making Arunachal Pradesh, particularly rural Arunachal, open defecation-free. He said the pressure on hospitals would greatly decrease if every citizen of the state maintained the momentum and spirit of cleanliness.
“We want our hospitals free from patients,” he said, highlighting the benefits of cleanliness.
Mishra said healthy habits and practices must be inculcated among the children, and called upon parents, guardians and teachers to take the lead in educating the younger generation about cleanliness.
“For the nation to be healthy and prosper, we have to understand the importance of practice, and imbibe and promote habits of cleanliness of mind and body,” the governor said. He expressed hope that every member of the society would make personal contributions in making India clean.
Deputy Chief Minister Chowna Mein, PHED Minister Wangki Lowang, and Environment & Forests Minister Nabam Rebia also spoke on the occasion.
The ‘Swachhata Hi Seva’ movement will culminate on 2 October, coinciding with the 150th birth anniversary of Mahatma Gandhi.
In Tawang, Chief Minister Pema Khandu launched the programme at Buddha Park. He said the movement “aims to accelerate the jan andolan for realizing the vision of a clean India by garnering greater citizen engagement.”
The CM said the programme would involve activities for awareness generation and community mobilization “through shramdaan, clean and green drives, and swachhata rallies.”
He appreciated the district administration for taking the waste segregation initiative in collaboration with the DUDA to encourage use of biodegradable bags in the township area.
“Under the initiative of Prime Minister Narendra Modi, the coverage of toilet facilities in the country has risen to 90% from 40% within four years,” the CM said.
He said that in Arunachal the ODF scheme has been dovetailed with the Centre’s scheme with additional incentive of Rs 8000 extended by the state government, “above the cost ceiling of Rs 12,000 fixed by the Central government, thus raising the cost of each individual household latrine to Rs 20,000.”
In Itanagar, Deputy Chief Minister Chowna Mein launched the ‘Swachhata Hi Seva’ movement at Gandhi Park in Niti Vihar.
The DCM lauded Modi for launching the Swachh Bharat Abhiyan in 2014, and said its effect was “visible in the state too, as the capital city, which was ranked the third dirtiest city in 2016, has significantly improved its position and placed among the 216th cleanest city of India by the Swachh Survekshan Survey, 2017.”
Mein expressed hope that with the ongoing enthusiasm for swachhta abhiyan among the people, the capital city would further improve its position on the cleanliness chart.
The DCM also offered floral tributes to the statue of Mahatma Gandhi, and administered the Swachh Abhiyan pledge to the people.
He led the cleanliness drive in the vicinity, which was joined by local MLA Techi Kaso, Capital DC Prince Dhawan and officers and officials of the UD department.
In Tezu, Lohit DC Karma Leki launched the movement, and advocated the need to inculcate the habit of personal hygiene. The DC also sought cooperation of the people for successful implementation of ‘Swachhata Hi Seva’ movement in the district.
In Upper Siang HQ Yingkiong, the movement was flagged off by ADC Tamik Talom in a programme organized by the district administration in collaboration with the PHE&WS department.
The ADC highlighted the importance of sanitation and health, and called upon the people to make the programme a grand success.
In East Kameng district, Seppa (West) MLA Mama Natung launched the movement at Donyi Jyaling Nyele Namlo in Seppa.
Lauding the PHED for effective implementation of sanitation-related works and awareness programmes, the MLA requested the people to support the department in its cleanliness activities.
DC Gaurav Singh Rajawat administered the ‘Swacchata Hi Seva’ pledge to the participants.
In Pasighat, MLA Kaling Moyong launched the ‘Swachhata Hi Seva’ movement in the presence of a large number of people at Daying Ering Memorial School.
He called upon the people to make the programme a grand success “as service towards cleanliness is the best tribute to Mahatma Gandhi.”
In Aalo, West Siang DC Sode Potom administered the swachhata pledge to government officers, senior public leaders and representatives of various committees to mark the beginning of the ‘Swachhata Hi Seva’ movement.
In Kra Daadi district, the movement was jointly launched by the district administration, the PHED and the UD department at Yaglung village in Palin circle.
PHE EE Likha Tekhi and UD & Housing DD Patey Punung briefed the gathering about the importance of the campaign. DMO Dr Higio Tama and ADC (Hq) Millo Kojin also spoke.
At Singchung in West Kameng district, ADC Taper Pada launched the movement in the presence of government officers, public leaders and public. He urged the people to maintain cleanliness and create awareness on hygiene and sanitation.
At Pangin in Siang district, the ‘Swachhata Hi Seva’ campaign was launched by DC Rajeev Takuk, who urged everyone to join the movement and work towards keeping their surroundings and toilets clean.
At Boleng, the campaign was launched by ADC Tayek Pado. At Rumgong, the campaign was launched by CO Khoda Jaliang in the presence of officers and staff from various departments and general public.
In Longding, MLA Thangwang Wangham flagged off the campaign in the presence of a large number of government officers and members of the public. (Raj Bhavan PRO, DIPROs & official release)