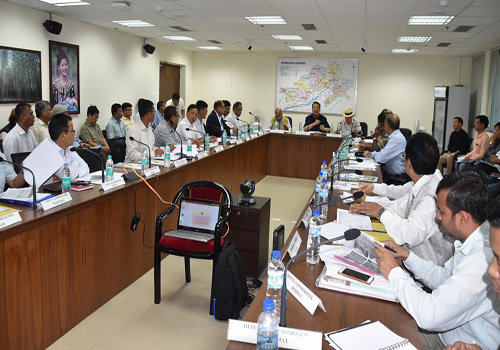 ITANAGAR, Oct 8: Deputy Chief Minister Chowna Mein on Monday reviewed the status of land acquisition, forest clearance, utility shifting, etc, for the Trans-Arunachal Highway, district connectivity roads, and other national highway projects in the state.
Besides deputy commissioners and representatives of the executing agencies, Chief Secretary Satya Gopal also attended the meeting which was held at the civil secretariat here.
Mein instructed the DCs to expedite the land acquisition process, in view of the limited working season in the state.
Although the Union Minister for Roads, Transport & Highways (MoRTH) Nitin Gadkari has assured to invest and construct roads worth Rs 50,000 crore, “the state is not able to take advantage of the support given by the central government,” he said.
“We are running much behind the time and not able to catch up with rest of the country. It is high time we must realize the importance of road connectivity and give preference to it over the compensation. With road connectivity other development will follow,” Mein said.
The DCM also instructed the DCs to hold fortnightly meetings with the executing agencies like BRO, NHIDCL, etc, and to seek help from local representatives to convince the public to resolve the issues that come up at the construction sites.
The power and the PHE&WS departments were instructed to complete the shifting of utility services by the end of October to enable land acquisition and handing over of 100% encumbrance-free land to the concessionaires.
The chief secretary advocated abiding by the guidelines while preparing estimates for compensation, and said any deviation from the notified rates would not be accepted either by the state government or the MoRTH.
He informed that the state cabinet, which met on Monday, has also passed a resolution to demolish all the structures that falls on the right of way of the highways.
Officials of the MoRTH, the NHIDCL, the BRO, and the PWD (highways) made PowerPoint presentations of the status of land acquisition, forest clearance, utility shifting, etc. Issues being faced by the executing agencies, the BRO, and other stakeholders were also discussed.
Among others, PWD Commissioner Bilatee Pertin, Highway CE Toli Basar, and PCCF Ravindra Kumar were present at the meeting. (PRO, DCM)