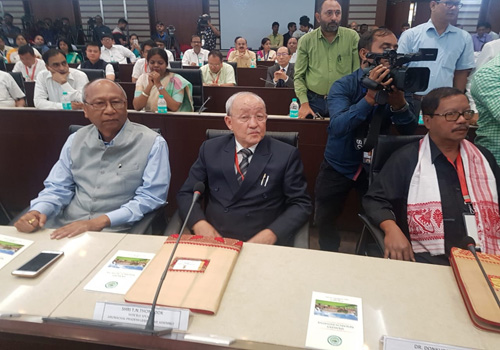 GUWAHATI, Oct 9: The 17th annual conference of the Commonwealth Parliamentary Association (CPA), India Region, Zone III, here discussed issues related to insurgency in the Northeast region, with the participants examining the scope for a collective approach to resolve the decades-old problem.
Arunachal Pradesh Speaker TN Thongdok, who chaired the session on Monday, said insurgency in the region “did not occur without any reason.” He called for setting up a special task force comprising “ministers, peers, and academicians” to hold talks with insurgent groups.
“Every community in the region once had their own system of administration and justice. Post independence, these communities felt that their age-old systems were replaced, and that their customs were infringed upon. Some responded to it with violence, some with resentment,” he said, and advocated addressing these reasons.
Thongdok also suggested replacing the word ‘insurgent’ with “some softer word,” saying this would encourage the groups to come forward for talks.
“The state governments have better understanding of the ground issues and the groups would be more comfortable talking to them,” he said. “Application of force has proved that it was not the right solution,”he remarked.
Kanubari legislator Gabriel D Wangsu called for a total review of the forest reservation policy and said “a perfect mechanism should be put in place, so that the people affected by insurgency get access to the precious land while ensuring that efforts to protect the forests are not disturbed.”
Wangsu said the benefits of packages and policies “should not trickle but percolate down to the last man, so as to ensure that such mechanism should not breed BPL families.”In Tirap, Changlang and Longding districts, most of the fertile and plain areas are declared as forest reserves, whereas the people are compelled to continue jhum cultivation in the mountainous areas,and thus are left reeling under poverty and unproductive engagements,” Wangsu said during the discussion on ‘Collective approach to resolve insurgency’.
“It is commonly held that insurgency finds its roots in poverty and thrives on economic deprivation, and hence it is no surprise that unemployed and poor people, mostly from underdeveloped areas, are easily drawn into activities detrimental to the growth of society,” he said.
Earlier, delivering the keynote address, the home affairs ministry’s Special Secretary (Internal Security) Rina Mitra presented an overview of the insurgency scenario in the Northeast, and enumerated statistics to prove that the situation had improved in the past few years. (DIPR)