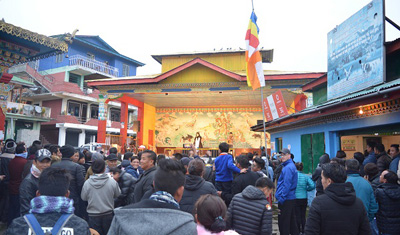 TAWANG, Nov 5: The anti-tobacco awareness campaign of the State Tobacco Control Cell (STCC) reached here on Monday.
A rock show was performed by the band Royal Flush, the brand ambassador of the anti-tobacco awareness campaign in the state, at the old market here.
The first in the series of awareness campaign was held in Lower Subansiri HQ Ziro on 12 October.
Prior to the show, Dr Sangey Thinlay, District Programme Officer of the district hospital here, appealed to the gathering to join hands with the tobacco control cell to make Tawang a tobacco-free district.
The student trainees of Khandro Drowatsangmu Nursing School presented a skit on the ill effects of tobacco use, while the members of NGO Human Rights First presented a dance on the theme ‘Choose life, not tobacco’.
Tawang Deputy Commissioner Sang Phuntso and SP SS Kalsi were also present. (DIPRO)