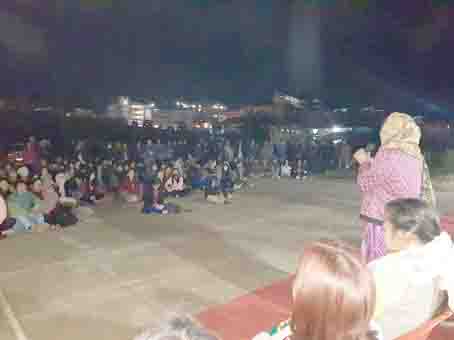 ITANAGAR, Nov 15: Intensifying their agitation against the Arunachal Pradesh Public Service Commission (APPSC), the qualified candidates of the Arunachal Pradesh Public Service Combined Competitive (Mains) Examination (APPSCCE) began an indefinite hunger strike on Thursday evening at IG Park here, with Tater Gao being the first to volunteer.
Earlier in the evening, a host of organisations and individuals came to visit the protesting candidates and assured the candidates of their support.
Addressing the candidates on the same evening, RGU professor Nani Bath said they have submitted a memorandum to the APPSC and sought postponement of the mains examination “in the interest of justice and fair play… till the court’s next hearing.”
Prof Bath said if their plea is not considered then he, along with RGU professor Otem Padung, representatives of the Arunachal Pradesh Women’s Welfare Society, the women’s wing of the Galo Welfare Society, the Galo Students’ Union, the All Arunachal Pradesh Students’ Union, the Arunachal Civil Society and the All Tagin Students’ Union, with the support of the Adi Students’ Union, the Wancho Students’ Union and the Apatani Student’s Union “may also be forced to be a part of the democratic movement.”
While the organisations assured their unrelenting support to the affected candidates, they urged the candidates not to take measures that would affect their health.
Speaking to this daily, Prof Bath said he was there in support of those who were prevented from attending the examinations.
“We tried to reason with the commission, but there was no commitment as such on postponing the examination. They just said that they would hold a discussion on it. We are not asking the APPSC to scrap the exam, but to postpone it, looking at the situation today. We want the intervention of the government, the governor,” he said.
APWWS president Dipti Bengia said the organisation was deeply hurt by the incident that took place outside the Kingcup Public School (one of the exam centres) on the first day of the exam.
“As mothers, we are concerned for the candidates and are morally with them,” Bengia said. She said if the candidates begin their hunger strike the APWWS would follow suit.
She also said she was glad to see mothers coming out to cook for their children in the rain, and commended their support.
Earlier, a parent who had arrived from Daporijo said she arrived soon after the first day of the examination and has been coming to the ground to help the candidates in preparing their meals since then.
“I take a Trekker from Naharlagun and come during the day to help them in cooking. Some parents who have to go to their offices here come to show their support in the evenings. I am worried for my child. I am worried for all the children here as we are their parents,” she said, and expressed hope that the APPSC would resolve the matter soon.
On 14 November, the Itanagar bench of the Gauhati High Court here directed the vice chancellor of Rajiv Gandhi University to constitute an expert committee comprising five eminent expert faculty members, excluding those who have already tendered their opinion in this regard.
The committee will examine the issues raised in the writ petitions of the commerce candidates and 221 candidates of other subjects regarding irregularities in the preliminary examination of the APPSC, and submit a report within 45 days.
The next hearing has been scheduled for 7 January, 2019.