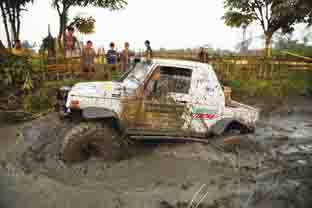 DAMBUK, Dec 16: Defending champions Gerrari Off-Roaders emerged as the early provisional leaders after the first two stages in the JK Tyre Orange 4X4 Fury here in Lower Dibang Valley district on Sunday.
Led by the ace driver duo of Gurmeet Singh and Kabir Waraich, the Gerrari team was in its element as they came third in the night stage on Saturday and second in the afternoon stage on Sunday to spring into the lead.
Gurmeet Singh, assisted by his co-navigator Gurpratap Sandhu, and Kabir Waraich by Yuvraj Singh Tiwana took a climb a steep hill and take a virtual free fall which was breathtaking.
The duo showed courage and skill to pick up 80 points.
In a similar stage called the Bamboo Rush, which was probably the toughest so far, with the cars needing to climb a tricky 60-degree incline and take a sharp and very narrow left before gliding down, they managed to finish second for a cumulative total of 165 points.
Literally every team had to use the winch to tackle this stage, making it a great spectacle for the viewers.
“The two stages were really challenging but we were up to it,” Gurmeet Singh said, after the second stage. “We are glad to be in the front as the field was really competitive,” he added.
Kabir Waraich too expressed his satisfaction after two days of good work. “We worked as a team to overcome the hurdles. We know it’s going to be tough over the next two days but we are ready for it,” he said.
The Gerrari Off-Roaders’ second team Gurinder Singh (Amrit Pal Singh) and Sushant Saini (Deepak Bagga) were also in the hunt, after clinching the maximum 100 points on Saturday.
Local favourites Team MOCA, consisting of Aditya Mei (Chow Sujeewan Choutang) and Chow Ujjal Namshum (Chow Ingieng Mein) and Boda Team C Madhusudhan Reddy (Rohit ER) and Sidhartha Santosh (Yanven Jamio) finished second in each of the stages to be in the fray.