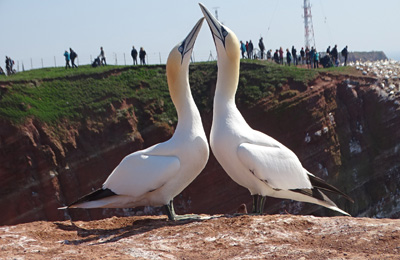 [ Dr Daniel Mize ]
When humans were gatherers, prior to taking to farming crops and rearing animals, our survival had been fully dependent on the nature or ecosystem services. After industrialization and many advances in science and technology, humankind became a little independent. Subsequently, we started to show arrogance towards nature and created havoc with the ecosystems.
However, the fact is, without the ecosystem services, the survival of humankind is not possible. Though humankind has become less appreciative of nature’s services, nature continuously provides its ecological services to us.
Many examples of this can be seen all over the world. While undergoing training in field ornithology, I came across an outstanding service of nature to humans in Helgoland, Germany. Helgoland, located in the northernmost state of Germany, Schleswig-Holstein, is an archipelago of two tiny islands – the 1 sq km triangular-shaped Helgoland, and the smaller, 0.7 sq km Dune, in the North Sea, a part of the Atlantic Ocean.
Helgoland rests on red sedimentary rock formed of Bunter sandstone, with the highest elevation of 63 metres above sea level. The island is inhabited by approximately 1000 residents, and the people’s main sources of income are fishing and tourism – and birds are the linchpin of tourism there.
The prime bird-based tourist attractions are the breeding and nesting seabirds’ colonies, and the 108-year-old Helgoland bird observatory or ‘Heligoland Vogelwarte’ in German.
Amazingly, there are approximately 700 pairs of nesting and breeding northern gannet, along with others like the black-legged kitiwake, the common guillemott, the northern fulmar, the herring gull, and the lesser and greater black-backed gull on the sea cliffs. These awesome colonies of seabirds can be even touched and patted by tourists.
Watching birds jumping into the sea and hovering over the cliffs, and female birds sitting on their eggs in sequence in large numbers is a quite a view. Every day, thousands of tourists visit the seabirds’ colonies – they relax, enjoy, rejuvenate themselves, and always wear an expression as if they were in paradise.
Helgoland is located along a major migration route for birds crossing the North Sea, and is an important stopover station for refuelling for onward journey. In 1910, the Helgoland bird observatory was established to study the migratory birds as well as the resident ones. Since then, birds are being trapped in catches gardens or ‘fanggarten’ in German, and then studied, analyzed, ringed, and released back.
Tourists throng this bird observatory every day. The staff and volunteers educate them about migratory as well as the resident birds of Helgoland, and demonstrate catching, handling and ringing of birds to tourists. Occasionally, school children are allowed to participate in a race to chase birds into the funnel-shaped trap or heligoland trap.
Like myself, scientists and scholars from America, Africa, Europe and Asia regularly come to undertake research and to learn the trade at the bird observatory.
The island is one of the top tourist destinations in Europe because of its birds, and it is deemed one of the birding hotspots in Europe and the best place in Germany to watch bird migration, sea bird colonies, and the rare vagrants. This has been possible only after the people began conserving the birds; else, in the olden days, the islanders also hunted birds as food.
Now, knowing the importance of the birds, the people do not harm the birds but keep food and nest boxes for the birds on their building premises to attract more birds to the island as the government as well as private enterprises do brisk business daily and earn plenty from avian tourism.
Arunachal Pradesh is also located in one of the biodiversity hotspots of the world. The state has more diversity of birds which are more colourful and enticing than those in Germany. We have many breeding colonies, wintering sites, roost sites, clay-lick sites, etc. The big question is, can we transform all these into stunning tourist destinations?
Yes – simply by not killing the birds. No laws, acts, etc, can help us accomplish our dream of transforming birdlife into great fortune, but attitudinal changes, like not seeing the birds as food but as friends who can bring great fortune to us, can do it.
Let’s start today; else the state will witness a ‘goose and its golden egg’-like situation. Nature has given us ample bird wealth; just conserve it. The benefits are ours, and we can reap the fortune ever and ever. (The contributor is Assistant Professor, Zoology Department, Rajiv Gandhi University, Rono Hills)