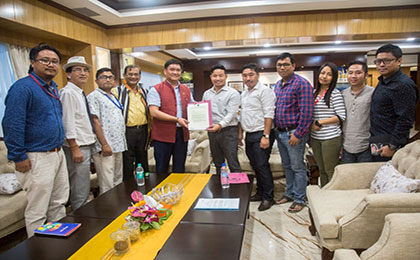 ITANAGAR, Jun 26: Chief Minister Pema Khandu has said that his govt will introduce Working Journalists Protection Act for the safety of journalists.
Acknowledging that the enactment of a Working Journalists Protection Act would ensure the safety of scribes, Khandu assured a delegation of the state media fraternity here on Wednesday that his government will work to introduce the Act for the safety of journalists in the state.
Maharashtra is the only state in India where an Act to protect the rights of working journalists has been passed.
A 10-member delegation, headed by Arunachal Pradesh Union of Working Journalists (APUWJ) president Amar Sangno, Arunachal Press Club (APC) president Dodum Yangfo and Arunachal Electronic Media Association (AEMA) president Migom Toko had called on the chief minister at his office here this afternoon and submitted a six-point memorandum.
Khandu assured to table the ‘pension scheme’ for working journalists in the budget session.
During the discussion, APUWJ president Amar Sangno apprised the CM that till date, the state governments of Assam, Tripura, and Haryana have implemented a pension scheme for their journalists who have retired from their profession.
“We feel that the work that journalists do is essential for the functioning of a democracy and is at par with the services done with the day-to-day functioning of the state and country. It is only fair, under such circumstances, that journalists who have served the public should be rewarded after long years of service,” he said.
Considering that implementation of the Majithia Wage Board needs wider consultation, involving stakeholders, the state media bodies however suggested that the state government come up with its own state wage board to ensure a fair wage for the journalists, keeping in view the cost of living in the hilly state.
“It has been over 10 years since the formation of the Majithia Wage Board, including the Supreme Court’s ruling in favour of the recommendations made by the board, but a majority of journalists under the wage board are yet to receive benefits,” Sangno added.
When reminded by media bodies that often-repeated promises, such as accommodation for accredited journalists at government guesthouses have never materialised despite the fact that journalists often travel to remote locations in the state where private accommodation options are limited, Khandu assured to issue notification on accommodation facilities for accredited journalists in government accommodations at concessional rates.
While the media bodies extended gratitude to the state government for partial modification of the Information and Publicity policy which has enabled the electronic media to officially avail government advertisements through it, they said that the new provision is strictly against the existing policy when compared to newspapers.
According to the new policy, to get advertisements for electronic/digital media, a media house has to attain administrative approval from the secretary IPR, which is not necessary for newspapers.
Recognizing that lack of clear-cut advertisement policies for electronic and digital (online) media houses has deprived many state-based channels from receiving advertisements, Khandu assured to introduce a revised and updated advertisement policy for the electronic and digital media.
Realising that journalists work in conditions where they often have to park their vehicles at several locations almost every day while performing their duties and pay heavy parking fees, the CM said that his office “will direct the secretary IPR to write to the government and semi-government parties to exempt media persons from toll and parking taxes.”
“A strong independent media is essential for the efficient functioning of our democracy. The welfare of journalists who are serving to strengthen our democracy will always be our concern. Thank you, journalist friends, for your kind presence and presenting your valuable suggestions in today’s pre-budget consultative meeting in preparation of our #ArunachalStateBudget2019,” Khandu said through his Tweeter and Facebook handles.