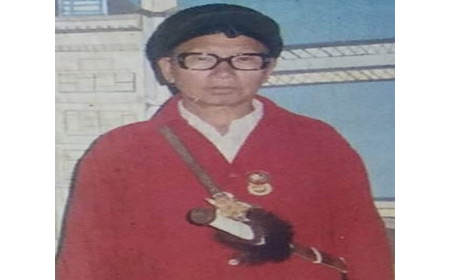 ZIRO, Aug 17: The head gaon burah (HGB) of Hari village in Lower Subansiri district, Hage Hanya, passed away at his residence in the village at the age of 88 years due to old age-related ailments on 16 August.
He leaves behind seven daughters and two sons.
Born in 1931, Hanya was a first-generation Arunachalee village level worker (VLW) to be appointed by the government.
He joined as VLW, now known as agriculture field assistant, in the early ’50s. He was posted at different villages in Ziro area, Rakhe village in the undivided Subansiri district, which is now under Kamle district, and Goiliang village in Hayuliang subdivision of the undivided Lohit district.
Hanya was one of the pioneers to introduce modern agriculture and horticulture practices in the then Subansiri district and in the villages of the undivided Lohit district during the NEFA days.
He was instrumental in opening and widening of narrow village lanes, especially in Hari village. He was also instrumental in release of bonded labourers and their rehabilitation at different places of his posting.

The water tank in Hari, inaugurated by Indira Gandhi on 18 March, 1958, was also a result of Hanya’s initiative. The construction of the dinkhu sicho (traditional water pipe), the main source of water supply to Hage area of Hari village, was also done under his initiative.

Pursuing his passion to serve his people, Hanya took voluntary retirement from service in 1969.
Seeing his keen interest in the field of public service, he was appointed as gaon bura in 1972-73, and was later elevated to the post of HGB in 1990, which he held till his death.
Hanya successfully disposed of several customary cases during his active service period. He was known for the upright and righteous stand he took while disposing of cases.
He again joined hands with the government to open one of the first fair price shops in the undivided Subansiri district, on 30 March, 1977.
Hanya will be laid to rest with full honours, as per the Apatani custom, on 18 August in his native village Hari.