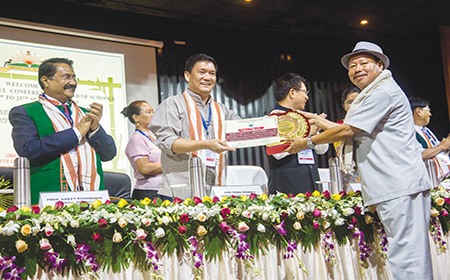 ITANAGAR, Sep 23: Chief Minister Pema Khandu has said all infrastructure gaps in the school education sector will be filled up in phases across the state.
He said this while addressing the first state level heads of schools’ conference organized by the secondary education directorate here on Monday.
Khandu said the state government plans to use “prefabricated school buildings to address the infrastructure gap created by geographical and climatic challenges.” He said such prefabricated buildings would first be used at the government higher secondary school (GHSS) in Itanagar as a pilot project.
He said the state government plans to develop the Itanagar GHSS as a model school by giving a facelift to its infrastructure.
“To improve education, transparency measures are also being taken up with budgeting exercises being conducted in full consultation with the public,” he said.
He called on all heads of schools to make education in government schools attractive to students by improving its quality.
“Despite top priority being given to improve school education in the state, people are reluctant to send their children to government schools,” he said, and urged the teaching community to play a proactive role in building confidence among the people.
“Compared to private school teachers, government school teachers are better paid and qualified; yet the government schools have failed to match the private schools in performance,” Khandu said.
The CM said illegal promotions will henceforth be discouraged in order to boost the morale of the teachers, adding that DPC meetings should be conducted regularly to ensure fair promotions.
Education Minister Taba Tedir, who also participated in the conference, presented a summary of all education-related flagship programmes of the state and central governments. RGU Vice Chancellor Prof Saket Kushwaha also spoke.
Earlier, the CM felicitated several retired heads of schools, and released a handbook, ShikshaArun, published by the education department. (CMO)