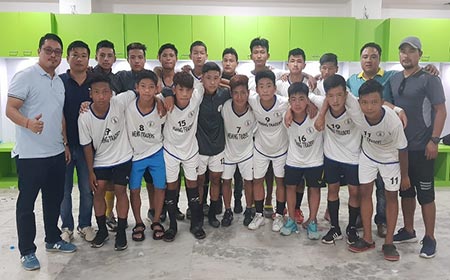 KALYANI, Nov 29: Arunachal colts stormed into the semifinals of the Hero Sub-Junior Boys National Football Championship (NFC) as the group topper.
They remained unbeaten and topped Group B with 10 points after a goalless draw with West Bengal in their last group match played here in West Bengal on Friday.
Arunachal had earlier beaten Maharashtra (6-0), Haryana (3-1) and Karnataka (3-0) on their way to the semis. They will meet Kerala in the semifinal on 1 December.
Meanwhile, Arunachal Pradesh Football Association (APFA) vice-president Kipa Takum, competition director John Neelam, and disciplinary committee chairman Gebin Kato visited the state team at the Kalyani Sports Complex here, prior to Friday’s match. They witnessed the match, and congratulated the team on its unbeaten run in the championship.