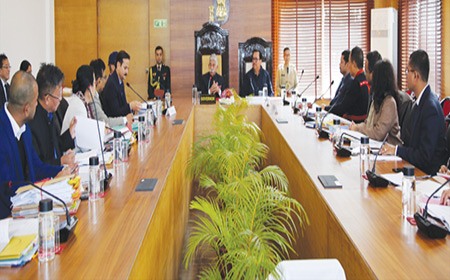 ITANAGAR, Jan 6: Governor BD Mishra on Monday expressed serious concern over the audit objections raised by the Comptroller and Audit General of India (CAG), and asked the state’s officials to “resolve the queries at the earliest.”
During a meeting he convened at the Raj Bhavan here, Mishra directed the officials to meet the representatives of the public accounts committee (PAC) of the assembly and the accountant general periodically to ensure that the state has no fault in any matter of accounts.
He advised senior officials to make concerted efforts to ensure better financial administration.
“By honest approach and perseverance, the present problems have to be eliminated during the current year,” he said.
The governor said that the financial grants which the state government receive are “hard-earned money of the taxpayers and should be utilized with probity and transparency.
“No mismanagement or inaction will now be tolerated from any officer, department or institution,” he said, and suggested conducting regular meetings among the PAC chairman, the accountant general and officials of the finance department to resolve the issues of audit objections.
Deputy Chief Minister Chowna Mein, Deputy Speaker Tesam Pongte, Public Accounts Committee Chairman Ninong Ering and Accountant General Purushottam Tiwary, along with the commissioner, secretaries and heads of departments attended the meeting. (Raj Bhavan)