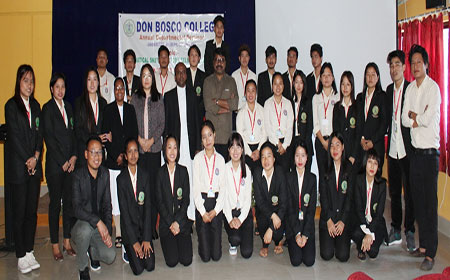 JOLLANG, Mar 13: Eight papers on Apatani, Galo, Hindi, Khampti, Miju Mishmi, Nyishi, Tagin and Wancho languages were presented by undergraduate students during a seminar on ‘Grammatical sketch of some selected languages’, organized by the English department of the Don Bosco College (DBC) here on Friday.
Speaking as the resource person, RGU’s Arunachal Institute of Tribal Studies Director, Prof Simon John, dwelt on the interconnectedness of language and society, and on how “loss of language is loss of identity.”
He also focused on the lesser known and endangered languages of the state, and underscored “the need for oral and written literature to preserve the local languages.”
DBC principal, Fr Jose Karamullil, in his address lamented the lack of formal education in local languages, and expressed hope that the students would try to preserve their languages in the future.