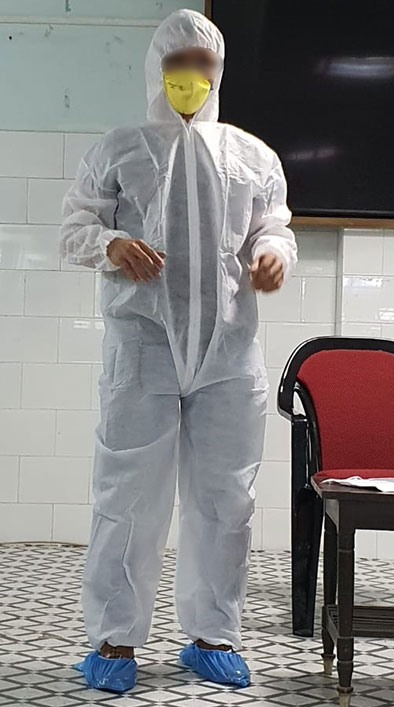 Staff Reporter
ITANAGAR, Mar 25: The health department is recalling the Personal Protective Equipment (PPE) supplied to the hospitals in the state because of poor quality.
Doctors have said that the PPE is not ISO marked and of poor quality.
The PPE were supplied to Tomo Riba Institute of Health & Medical Sciences (TRIHMS) and RKM, Itanagar, general hospitals among others.
The doctors say that with such poor quality of PPE, their lives are at risks as well as there are high probability of spreading the virus.
Secretary Health Dept, P. Parthiban said that PPE were locally procured and that there were issues regarding the “quality”.
The DMO’s have been instructed not to use the PPE supplied, he said while responding to a question from this daily.
The new batches of supplies, to be provided by HLL is expected to reach by Saturday.

Meanwhile, the directorate of health services, Naharlagun has blacklisted the PPE supplier M/s Shara Drugs, Itanagar for supplying sub-standard equipment and has announced to initiate punitive action against it.
In an order issued on Wednesday, the DHS has further directed all district medical officers not to use PPEs supplied by the said supplier till further notice
‘Due to the unprecedented situation in view of Covid-19 pandemic, local vendors in the Capital Complex were asked to supply the required equipments/logistics as per HLL Life Ltd. rates as early as possible. While many vendors supplied many items, M/s Shara Drugs, Itanagar supplied the PPE and due to extreme urgency, the poor quality of the PPE could not be ascertained. It is therefore directed that the PPE distributed may be withheld from use and may not be used any further until fresh stock of consignment are received from the GoI or HLL Life Care Ltd. to whom we have requested for the supply,’ the order further stated.
Meanwhile, sources also informed that the ICU for Covid-19 at TRIHMS is still ill-equipped.
The sources informed that the TRIHMS authorities had apprised the state government about the two ventilators procured earlier, that have been returned as they were of low specifications and not suitable for tertiary centre. The TRIHMS authorities are currently waiting for procurement of new ones.
It was also informed that the oxygen supply to the ICU for Covid-19 is also yet to become operational.