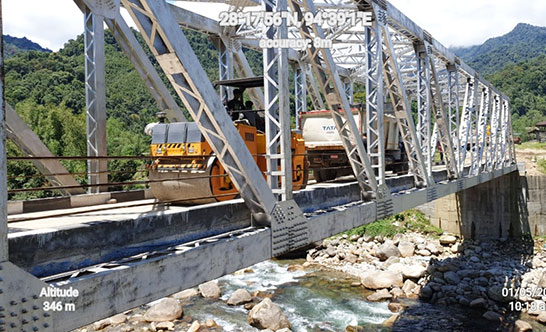 LIROMOBA, May 2: The build-up girder (BUG) bridge over the Siru river at Sesilikar village in Liromoba constituency of West Siang district was declared open on Friday.
Before the opening of the bridge, a load test was carried out by the executing agency, the rural works department, in the presence of RWD EE Michi Nibo, AE Nyomar Karbak, JE K Talukdar, and officials of the construction firm.
The opening of the 50-metre-long bridge was eagerly awaited by the people of Dego Kamki, Goli Balek, Sesi Likar and Sirutali villages, officials said.
Besides being a lifeline for the villagers, the bridge would also boost the region’s agriculture sector, they said.
The construction of the bridge, as part of the Dego Kamki-Sirutali PMGSY road construction work, was an initiative of local legislator Nyamar Karbak.
Karbak said the bridge would be formally inaugurated after the lockdown “or whenever feasible.” He expressed hope that the bridge would help many prosper in the field of agriculture and allied activities, “besides easing road communication for all.”