BALINONG, Oct 8: Two weeks after the reopening of the Industrial Training Institute (ITI) in Balinong in Changlang district, 17 persons there have reportedly tested Covid-19 positive. Of them, 16 are students. 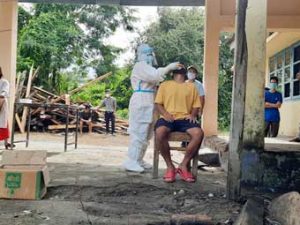 One staffer tested positive on 5 October, following which tests were carried out on the others. Fifteen of those who tested positive are girls who had returned from different districts.

The ITI opened on 21 September.

The district administration has declared the ITI as a containment zone, which came into force on 6 October and will remain in force upto 19 October.

There are allegations that the authorities at the institute have not been receptive to the complaints of the students and the staffers.

Some of the staff alleged that they were made to attend duties even after submission of application for medical emergency and earned leaves. On failing to attend duties, their salaries are deducted.