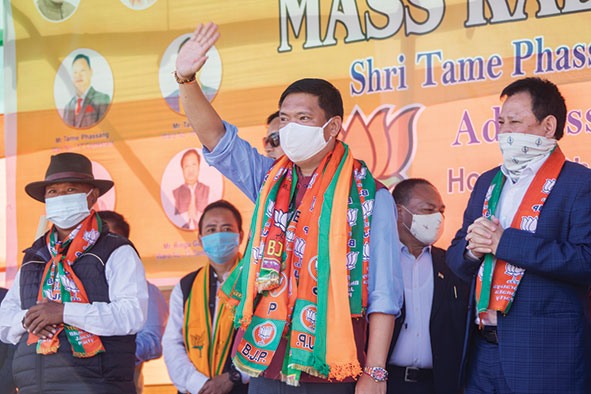 Addressing a rally of BJP supporters, the chief minister thanked the people of Arunachal for electing unopposed 5,564 BJP candidates to the local bodies. He said such a mandate was possible “because the voters are intelligent today and have themselves witnessed the performance of the BJP party.”

“Under BJP, all big pending projects have been completed, and many others are on the verge of completion. Besides development, the BJP has also focused on transformation and bringing transparency in governance,” he said.

Khandu appealed to the people to vote for the BJP, saying that “this election is crucial in electing good candidates for making the smart city project a successful venture.” He said much effort went into winning two proposals for smart cities in Arunachal, making it the only state in the entire Northeast to be granted it.

“Since Itanagar is the face of Arunachal,” the chief minister said, “it is our duty to keep the capital city clean, orderly and beautiful.”

He promised to improve the law and order situation in the capital region and assured to increase installation of CCTV cameras and streetlights all over the city, including along the four-lane highway.

Khandu also promised to get all sectoral roads in the city paved with CC pavement. He said the airport project in the capital had been languishing for a decade but the work finally started after much effort went into resolving pending issues, finalizing the site and completing the ground survey.

He said that, under the BJP, railway services to the capital region have also increased.

The chief minister assured that all 20 subjects would be devolved if the BJP retains power in the municipality. (CM’s PR Cell)

Our staff reporter adds: Chief Minister Pema Khandu said that the BJP nominees getting elected unopposed in the panchayat and municipal elections “is testimony of the good work done by central and state governments.”

Speaking to the media here after addressing the election rally, he said that in a democracy anyone can fight elections.

“No one was forced to withdraw nominations. People trusted our work and therefore many BJP nominees won the election unopposed,” said Khandu.

Further, the CM said that, during his interaction with RSS chief Mohan Bhagwat, no religious issue was discussed and the talks centered on the wellbeing of Arunachal.

On the issue of China setting up new villages near Bumla Pass, the CM said there is no incursion. “Chinese activities are concentrated on their side of the border. So, we cannot comment on it. However, the government of India is also making efforts to improve infrastructure on the Indian side of the border,” he said.