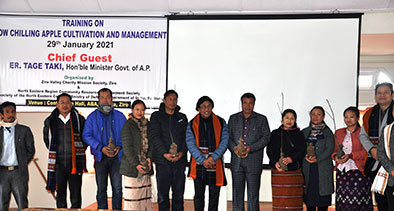 ZIRO, 29 Jan: The first batch of saplings of the low chilling variety apple, HRMN-99, was distributed among the beneficiaries on Friday by Horticulture Minister Tage Taki during a training programme on ‘the cultivation practices and management of the HRMN-99 variety of apples’, organized here in Lower Subansiri district by the Ziro Valley Charity Mission Society.

The pilot project is funded by the North Eastern Region Community Resource Management Society under the DoNER ministry, and will be implemented in 14 acres of land through 18 beneficiaries.

Expressing gratitude to the DoNER ministry, Taki said, “Such encouragement from the ministry to the farmers will boost their morale and motivate them to venture into sustainable farming.”

“Earlier, apples were very prominently grown in Ziro, but due to the shortfall in chilling requirements, those varieties could not be continued. But now, with the introduction of the low chilling apple variety, apple production in Ziro will flourish again,” he said.

Speaking about making Ziro self-sufficient in vegetables, he said, “Ziro, which is bestowed with agro-climatic condition, is favourable for growing many off-season crops and can be a saviour during crisis. This potential should be explored by all the farming community in collaboration with the agriculture and horticulture departments.”

The programme also included an interaction between resource persons and the beneficiaries.

Six thousand saplings of HRMN-99 variety apples will be distributed among the beneficiaries.