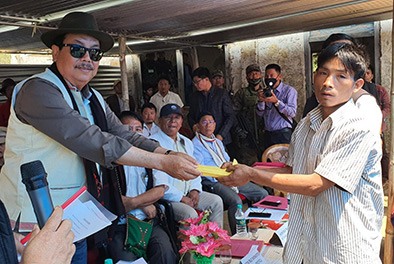 The team also took stock of the relief and rehabilitation works carried out by the Tirap district administration.

Interacting with the villagers and fire victims, Mein said, “The state government is with the people of Longliang village,” and gave assurance that the government would extend all possible help for restoration and re-establishment of the village.

Informing that the state government plans to develop three model border villages in the eastern and western belts of the state, Mein said that Longliang, located near the Myanmar border, “will be taken up as a model village in the next year’s budget” and requested the villagers to identify a new site for the establishment of the model village.

He requested local MLA Chakat Aboh to “take up Longliang village under the Chief Minister’s Adarsh Gram Yojana,” saying that doing so would help to rehabilitate the village properly.

He also requested the Tirap DC to “keep the village in priority list under various central sponsored schemes, wherever feasible.”

The DCM informed that the state government has sanctioned Rs 1,16,47,800 from the state disaster response fund for providing immediate relief assistance to the fire victims @ Rs 1,01,900 each for fully damaged and Rs 5,200 each for partially damaged houses, apart from sanctioning Rs 50 lakhs for purchasing CGI sheets.

Responding to a memorandum submitted by the villagers for completion and maintenance of the PMGSY road from Barap to Liangchang village and for functionalizing of the health sub-centre in Barap village, the DCM assured to look into the matters.

He informed that relief camps have been set up at the school and the community hall here. He also informed that electricity and water supply in the village have been restored, and “books, notebooks, pencils and uniforms have been provided to the students of the affected families, so that their studies are not hampered as the examinations are approaching.”

The DC further informed that contributions from various corners, viz, civil societies, NGOs, religious institutions, student organizations and individuals “are pouring in cash or kind for the fire victims.” He informed that, apart from the government funding, the chief minister has donated Rs 20 lakhs and the DCM has donated Rs 15 lakhs out of pocket for the fire victims. Lok Sabha member Tapir Gao sanctioned Rs 10 lakhs for purchasing CGI sheets, he said.

The DCM distributed CGI sheets to the fire victims. He also provided financial assistance of Rs 1 lakh each to the next of kin of the two who perished in the inferno.

Wahge and state BJP general secretary Chau Zingnu Namchoom also provided Rs 1 lakh each to the next of kin of the deceased on behalf of the BJP.