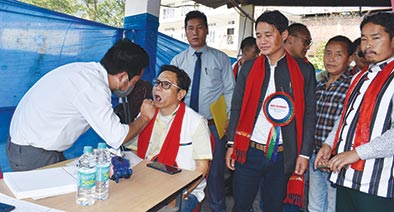 BHALUKPONG, 2 Apr: Arunachal Pradesh Building & Other Construction Workers Welfare Board (APB&OCWWB) Chairman Nyato Dukam said that labourers/workers are nation-builders, and appealed to them to rededicate themselves to the development of the country and maintain the dignity of labour.

Dukam was addressing a huge gathering here in West Kameng district on Friday on the occasion of an awareness programme and a medical checkup camp.

He said that “the dignity of labour by the worker community, either of organized or unorganized sector, should not be compromised at any cost, and the workers should also act in the same manner for the development of their area, district, state and country without affecting the quality.”

“I have been touring various parts of the state, creating mass awareness among the worker community, with active participation of labour and workers’ unions. There are several statutory and non-statutory benefits and, after my joining as chairman, I enhanced several assistance schemes in view of the requirement of today’s necessity,” he added.

“Kits procured by the board are being distributed across the state and after this, essential items will be procured. There has been information of mismanagement of fund in the name of creating infrastructure in various parts. Inquiry has been ordered and investigation is on, and no one will be spared if found guilty,” Dukam said.

by the board have been encroached on, which needs to be returned to the board.”

He said several districts need labourers’ shed, labourers’ guest house, etc, but before the new proposal is taken up, the board needs to verify all the property created earlier.

The awareness programme and health checkup camp, which also included distribution of tool kits and essential items, was organized by the Bhalukpong unit of the AAPLU in collaboration with the APB&OCWWB.

Welfare kits were distributed to hundreds of registered workers on the occasion.