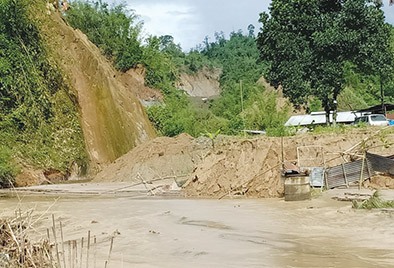 ITANAGAR, 16 Jun: Flashfloods and land blockages triggered by heavy rain caused severe damages in many locations of the capital region on Wednesday.

DDMO (in-charge) Tem Kaya, after visiting all the flashflood-affected areas, informed that flashfloods occurred at Borum and Tarajuli villages near the Naharlagun railway station and caused severe damages to properties.

However, there was no report of any casualty.

The DDMO said that one culvert bridge in Tarajuli has reportedly been completely washed away, and that a house in F Sector, Naharlagun has been submerged by flashflood.

“The cause of flashfloods was incessant rain, but mostly due to illegal earth-cutting and human interference with river course,” the DDMO said.

The district administration swung into action and engaged men and machineries to clear all the blockages. The administration also asked those residing near vulnerable locations to shift to relief camps and safer locations.

The Arunodaya government higher secondary school (GHSS) in Itanagar, the GHSS in Model Village and the Nyokum hall in Banderdewa have been identified as relief camps in the capital region, and the nodal officers for the relief camps are CO Moyir Kato (Itanagar), CO Laxmi Dodum (Naharlagun) and CO Ritu Tawe (Banderdewa).

ICR DC Talo Potom had issued an order on 12 May, directing the residents in vulnerable areas to move to safer locations to avoid loss of lives and properties. The DC had also issued a prohibitory order on 11 May, banning earth-cutting in the capital region till further orders.