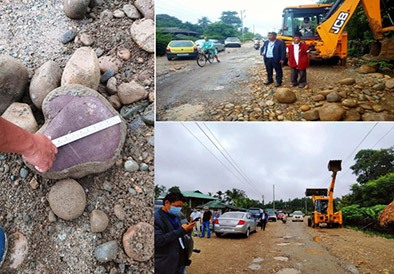 RUKSIN, 3 Jul: The Mirem-Mikong-Jonas Road Monitoring Committee (MMJRMC) has said that it is going to lodge an FIR against M/s Puna Hinda Construction and officials of the Pasighat PWD division over the work being carried out on the road.

On Friday, an investigation team comprising the HGB, the AE and the JE of the Pasighat PWD division, public leaders and the MMJRMC team inspected the project site. The team decided to scarify the road using a backhoe loader (JCB) and found that only boulders were dumped in, pressed and flattened to form the surface of the road, using a vibrating roller.

as sub-grade material on the stretch from Ruksin bridge to Sille bridge (Niglok) and there was no construction of embankment, sub-grade works and formation width of the road. The contractor reportedly dumped boulders on the existing road to cover up the whole process of road foundation work.

The team accused M/s Puna Hinda and the Pasighat PWD division of “being in connivance to loot public money by substandard works and illegally dumping boulders in sub-grade layer in the MMJ road construction project instead of earth, soil, sand and silt specified in MMJ road DPR.” It also said that “the construction earth works was found to be nil.”

“Despite repeated information, the contractor, the PRO and the site engineer of M/s Puna Hinda did not turn up and take responsibility for the illegal works being carried out in MMJ road construction project, which amounts to wilful negligence and conspiracy to illegally continue the construction works without following the technical specification of the project,” it said.

The MMJRMC said it would lodge an FIR against “official of PWD, Pasighat division and the firm for indulging in irregularities.”