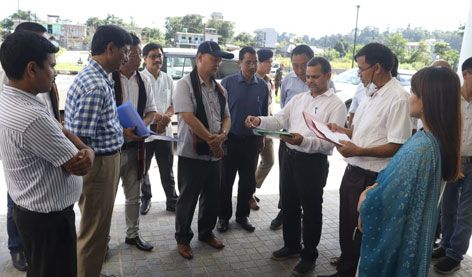 The project is funded by the NEC for creation of infrastructure in agricultural and allied sciences at the GTC.

Chalai visited the main building housing the academic and administrative blocks, and the transit hostel. He stressed on “the importance of domain expertise in the field of agriculture through the institute,” and advocated construction of a boundary wall at the earliest to avert encroachment.

The college’s Dean (i/c) Dr Girish Chand informed that, with the completion of the full-fledged campus, regular classes will begin from November.

“The girls’ hostel is 100 percent and the boys’ hostel is 90 percent complete. The current batches are attending their classes and adjusted

in the College of Horticulture, Pasighat,” he added.

Later, the secretary along with Ering inspected the Mirem-Mikong-Jonai road project, and surveyed the entire 15.670 kms stretch of the road.

Ering highlighted “the importance of the NEC-funded MMJ road project in accelerating the socioeconomic progress of Ruksin subdivision, which is an agri-horti hub.”

At Mirem, the secretary interacted with the people and the GBs of the village and sought their support “in developmental efforts.”

PWD EE Tani Taki informed that “90 percent of the work has been done and it will be completed by this November, ahead of the scheduled target.” (DIPRO)