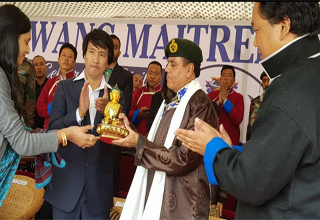 TAWANG, Sep 10: Lieutenant General, AS Bedi (YSM, VSM) of GOC 4 Corps emphasized on better civil-military cooperation to ensure external as well as internal security of the nation.
Inaugurating the Tawang Maitree Diwas on Sunday, Lt General Bedi said that it is imperative to work hand in hand to ensure the external as well as internal security of our nation.
Reiterating the army’s commitment and cooperation towards the development of society in various fields, he assured that the army would continue to work towards realizing the dream of a self-reliant and dignified Arunachal.
Bedi expressed happiness over conduct of the event after a gap of almost six years and believed that the event would go a long way in strengthening the civil-army bond and also in deepening the feelings of patriotism amongst the local youths.
Parliamentary Secretary (RWD) Jambey Tashi assured that the people of Arunachal in general and Tawang in particular would always stand by the army in all their endeavours. He expressed happiness that the army recruitment rallies and admission in Sainik Schools have given the local youth an opportunity to build their career and also serve the nation. He also lauded the role of the army in extending humanitarian assistance and help to public during crisis, like natural calamities and other disasters.
Spiritual leader Sri Sri Ravi Shankar and Union Home MinisterKiren Rijiju, who were supposed to attend the occassion along with Chief Minister Pema Khandu could not attend the two-day event due to inclement weather.
The Chief Minister’s message on the occasion, which was read out by Jambey Tashi, termed the celebration as a humble statement of relation of love and respect between the local populace and Indian Army.
“The beautiful civil-military relations built and maintained over the ages would continue to safeguard the interest of our nation,” the message read.
Brigadier MP Singh, Commander, Station HQ Tawang was honoured with a Certificate of Commendation by the Government of Arunachal Pradesh as an acknowledgement of his contribution towards reaffirming people’s confidence in the Indian Army.
A military display and various extravagant cultural performances by the school children, army personnel and traditional cultural troupes were also presented.
As desired by the Chief Minister, a Biometric Enrolment Centre has been set up by the Department of Statistics at the venue. A medical camp is also being organised jointly by the Department of Health & Family Welfare and the Indian Army.
Tawang MLA Tsering Tashi, Deputy Commissioner in-charge Dr Sonal Swaroop, Zilla Parishad Chairperson Jambey Tsering, Abbot of Tawang Monastery Reverend Rikya Lhavoe Rinpoche, various ranks of the Indian Army and police officials attended the inaugural programme at Tsangyang Gyatso High Altitude Stadium, Tawang.
The event, sponsored by the Chief Minister, is organised jointly by the Indian Army, local administration and YUVA Arunachal. (DIPRO)