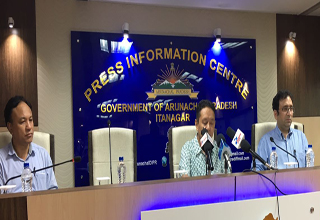 Staff Reporter
ITANAGAR, Sep 16: Hitting back at the Arunachal Pradesh Congress Committee (APCC), the state government on Saturday categorically rejected the allegations made by the APCC that the Pema Khandu led Government has mismanaged an amount of Rs 10,000 crores of the state funds under Revised Estimate, SADA and SIDF.
Briefing media persons at the Press Information Centre in the Civil Secretariat on Saturday, Government Spokesperson Passang Dorjee Sona on Saturday denied the allegations of APCC President Takam Sanjoy, terming it as rash, malicious and irresponsible.
“It is a figment of imagination of the state Congress President and represents the total absence of depth of understanding, which is unexpected from an experienced leader”, said the Spokesperson, who also demanded that APCC chief Sanjoy substantiate the claims of mismanagement of Rs 10,000 crore or face a defamation suit.
“It is beyond comprehension from where an absurd figure of Rs 10,000 crore has been conjured. It clearly shows that opposition is oblivious of the scale of finances available with the state”, Sona ridiculed the Congress and accused the party of suffering from ‘selective amnesia”.
He presented the government’s financial position by elucidating that Rs 8,388.30 crore was from FFC Grant, state own resources were Rs 1,157 crore, CSS was Rs 2,000 crore and borrowings were Rs 713.91 crore.
Giving details of the expenditure profile, Sona said that out of these broad figures, Rs 4,453.91 crore was for salaries, wages and pension, while Rs 391.14 crore was for repayment of debt and Rs 2,026.67.20 crores for central programmes, including state share. The expenditure profile for normal departmental activities was Rs 2,117.40 crore and SIDF Rs 716.92 crore.
Sona also clarified that majority of funds under SIDF were not diverted to Tawang and Namsai districts, and said that out of Rs 716.92 crore under SIDF funds, Rs 35.35 crore was allocated to Tawang and Rs 35.15 crores to Namsai districts, which is barely five percent of each of total allocation.
On composite sanction, the government clarified that in order to streamline and rationalize the concurrence mechanism, composite sanction method was adopted which was widely appreciated by the public representatives and government functionaries.
The Spokesperson also informed reporters that explanation has been sought by the Chief Secretary to substantiate, what it termed unfounded issues raised in her note.
“The government sought an explanation from her on what prompted her to shoot a letter to the Finance Commissioner”, he said.
“Being the Chief Advisor to the government, she never mentioned any such apprehensions to the Chief Minister, Finance Minister or the Council of Ministers on any occasion even after lapse of several months of implementation of the rationalized system”, the Spokesperson added.
Flaying the Congress party for unfounded allegations against the state government, the Government Spokesperson stated that the people should not go by the Congress’ pack of lies.
“It shows the immaturity of the Congress party, who has confused the public without any substantial evidences”, he said.
On granting of citizenship to Chakmas and Hajongs, Sona clarified that the state government is extremely concerned about the issue and appealed to the people of Arunachal to unite instead of politicising it in this hour of crisis.
The Government Spokesperson said that it is looking at all legal options to find an appropriate mechanism.
“The people should understand that the government stands with the indigenous people, and it would stand firm to defend the rights of its own indigenous people”, he added.