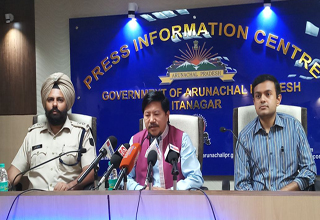 Staff Reporter
ITANAGAR, Sep 23: Declaring the 12-hour bandh on September 25 by the Mere Vichaar Andolan Committee (MVAC) illegal and an attempt to disturb the official working of the government, Parliamentary Secretary for Home, Pani Taram called on all citizens of the state to carry on with their daily activities as usual.
Addressing reporters on Saturday at the Civil Secretariat, the Parliamentary Secretary Home said that it was unnecessary of the MVAC to continue with its protest when the state government has already handed over the notes to the central government, to be forwarded to the Central Bureau of Investigation or National Investigation Agency for further investigation.
Saying that former Chief Minister late Kalikho Pul strongly opposed bandhs in his time, Taram requested the MVAC to respect his memory and not disrupt the developmental activities of the state or harass the common masses.
“Following their demands, we have already sent the notes to the Government of India and investigation is underway. It is now upon the Central Government to look into the matter and give an update”, he said and urged on the MVAC to withdraw its bandh.
Citing MLA Dasanglu Pul’s appeal to defy the bandh, Taram said that the family also did not agree with the modus operandi of the MVAC.
The Parliamentary Secretary Home assured that there were 10 companies of the security forces to contain any untoward situation and called on the people to not fear any troublemakers.
“If anyone is attacked, individual arrests will be made under the Arunachal Pradesh Unlawful Activities (Prevention) Act”, he said, and cautioned that trading licenses will be cancelled on the spot by magistrates on duty if business establishments, including petrol depots, were closed on the day.
He also gave strict directions to government officials to attend their respective offices on Monday or face action.
On concerns that a similar situation as the AAPSU bandh could arise on Monday, Superintendent of Police Sagar Singh Kalsi and Deputy Commissioner Prince Dhawan assured that they have taken stronger measures and made appropriate strategies to protect the citizens and public property.
“The AAPSU bandh is an international issue and the people of the state are in solidarity with them. It cannot be compared to the bandh scheduled for Monday”, the Parliamentary Secretary added.
Earlier, in an emergency meeting, the DC asked the transport federation and APSTS to ensure their vehicles are plying as usual during bandh hour. The representatives of the transport federations and market associations assured to support the DA in defying the bandh.
In a separate order, the DC has directed the DDSE Capital Complex to ensure that all the schools within the Capital Complex remain open on the day. Mid-term examinations of several schools are also currently underway.
He also directed the DFCSO and branch managers of different banks to remain open.
Further, the Bharatiya Janata Party councillors under the Itanagar Municipal Council also called a press conference on Saturday, where it strongly opposed the bandh and called on the Capital dwellers to defy the bandh.
Citing problems the bandh would create for daily wage earners and commuters, Councillor and Coordination Committee Chairperson, Taba Yall Nabam appealed to the people from Banderdewa to Chimpu to support the IMC and assured that the citizens had nothing to fear.
“We cannot avoid stray incidents, but will provide 100 percent security”, she said.
Former Convenor of MVAC, Councillor Gora Lotak also said that the issue of the MVAC has escalated from wanting justice to a political struggle, and appealed to citizens to defy the bandh.
Chief Councillor Kipa Kakum clarified that they were not concerned with the MVAC demands, and their only concern was the safety of the people of the Capital Complex.
The IMC BJP Councillors said that they would always be against bandhs which are held against the interest of the Capital people.
The All Capital Complex Student Union (ACCSU) vehemently condemned the MVAC for its proposed Capital bandh on September 25 in protest against non-fulfilment of its demands.
Stating that bandh has never been proved to be a solution to any problem, the ACCSU appealed to the capital dwellers to defy it as people are tired of such bandhs in the Capital.
The MVAC has called a bandh for September 25 to press for its demands, which include investigations into the allegations made against Chief Minister Pema Khandu, Deputy Chief Minister Chowna Mein, Government Spokesperson P D Sona, and several others in the 60-page note of ‘Mere Vichaar’, allegedly written by former Chief Minister Kalikho Pul, besides return of Rs 4 crores allegedly taken by Sona.