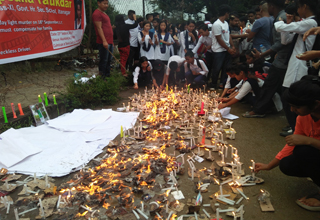 ITANAGAR, Sep 23: Thousands of students from schools of the Capital Complex, under the banner of the Students United Movement of All Arunachal (SUMAA) on Saturday took out a massive candle light peace rally here, demanding justice for Apsana Talukdar, who was killed after being knocked down by the Horticulture Department staff bus near Scholar’s Institute on September 22.
She was a class XI student of Government Higher Secondary School, Itanagar.
They expressed solidarity with the family members of late Apsna and took pledge, along with SUMAA members to seek justice for the victim.
“Today, it is Apsana; tomorrow it could happen to anyone”, said SUMAA General Secretary Suraj Ligu and Vice President (admin) Taje Jeke.
SUMAA leaders also threatened to gherao the Horticulture Department if the driver involved in the accident was not terminated from service and adequate compensation was not provided to the family of the victim.
The sister and mother of the victim thanked all the student friends of Apsana from various schools and SUMAA for showing strong solidarity to them and standing by them at the time of grief.