CHIMPU (ITANAGAR), Nov 5: Papum Pare with a magnificent show at the second State Olympic Games finished atop the medal tally with 19 gold 14 silver and 16 bronze medals on Sunday.
Kurung Kumey finished second with 14 gold, 12 silver and 17 bronze medals, followed by East Kameng (G-14, Sil-10, Br-16) in third position.
State Chief Information Commissioner Dr Joram Begi gave away the trophies to the champion and runner-up teams.
Addressing the closing function here this afternoon, Dr Begi exhorted the sportspersons to strive for sporting excellence and make a career out of it (sports).
Stating that hill people, like Arunachalese had perfect physique for games and sports, Dr Begi called for identifying and grooming promising talents at their tender age.
“Meiteis (or Meetai, Manipuri), who belong to warrior community, are utilizing their physical advantage in sports and that is why Manipur is making tremendous progress in sports,” Dr Begi said.
He also said that the central as well as state government should pour more funds in the sports sector.
He lamented that India, being the second largest populous country, is still lagging in sports and called upon the sports administrators and all sports bodies to work united with dedication and missionary zeal to bring sports revolution in Arunachal Pradesh.
Dr Begi declared the second State Olympic Games closed and the Olympic flag was lowered.
Around 2000 participants, including officials from 21 districts participated in it.
Later, in an informal interaction session with the athletes from Longding, Arunachal Olympic Association Secretary General Abraham Kaya Techi and Treasurer Likha Tara encouraged them in sports. Both the AOA officials advised them to practice hard for perfection, which will ultimately lead them to success.
Abraham also assured all possible help and support to the newly formed District Olympic Association, Longding. 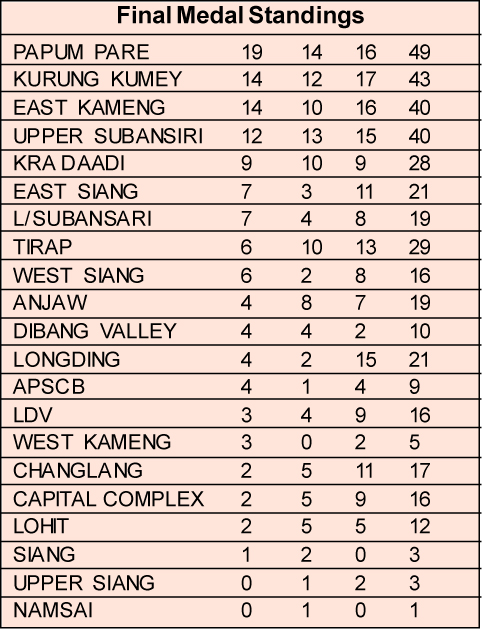