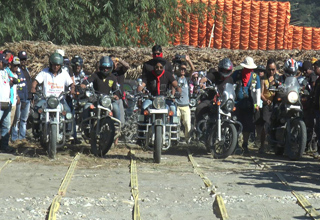 [ Nellie N Manpoong ]
ITANAGAR, Nov 14: As Arunachal Pradesh hosted – for the second time – over a thousand Royal Enfield riders in the 9th edition of the North East Riders’ Meet (NERM), from November 10 to 12, critics instantly drew cynical images of the riders and the event itself.
The preconceived notion that a bikers-only event would bring “chaos and calamity” was apparent by how many believed the riders would be a “bad influence” on young minds.
But for someone who has attended a fair number of festivals in Arunachal Pradesh, there wasn’t much of a difference here, really – except for a few but crucial ones.
For one, this was an exclusive event for Royal Enfield riders only. Otherwise the three-day meet on the windy riverside of Rengging village in East Siang district had everything else a typical festival in Arunachal has – cultural displays, stalls set up across the field, events to keep the riders engaged, and so on.
The Adi war dance, the Galo and Nyishi dances, the songs by Omak Komut Collective – these and other traditional presentations gave the riders from across the country – and a few from abroad – an opportunity to witness a slice of Arunachal, while bands like Serenade, Pulse Pundit, Alien Gods, Soul of Phoenix, and others gave the head-bangers among the lot a chance, as it were, to let their hair down.
The second difference was that the stalls were not vending alcohol and dried meat at exorbitant prices like in most other festivals. In fact, the prices were extremely reasonable; a pleasant surprise to the pockets. And more than half of the stalls had bike accessories and riding gear, which made sense, considering the thrust of the event.
No riders’ meet would be complete without a few motorbike-related events, and the Arunachal Bullet Club, with the enthusiastic support of The Gliding Piranhas, the 30° North and the Royal Siang Riders, made sure that the line-up of events was well-coordinated.
The slow race and the dirt-track race over sandy terrain gave the riders an opportunity to display their skills and test their machines’ endurance, and the scorching afternoon sun was not a deterrent to the riders who had travelled hundreds and thousands of miles to get here. They took to the thrill of speed boating on the mighty waves of the Siang River, and participated in a beach volleyball competition.
But it was the arm wrestling competition on the final day which attracted the biggest crowd.
Camping under the stars and staring up at the open sky was what the nights offered. Riders, including from Switzerland, the Netherlands, Nepal, Bhutan, Sri Lanka, and Germany, who met for the first time sat around bonfires at the campsite to keep warm against the cold and the wind. They shared stories of their hometowns and mused on their next destinations; they told stories of adventure, and spoke of their love for the open roads and their machines.
The riders’ meet certainly has the potential to bring in tourists, even if the tourists are limited to Royal Enfield riders. The event gathered over a thousand riders with little to no advertisement because of the enthusiasm of the riders and the brotherhood they share.
While the government is busy handing out crores of cash to events which are limited mostly to locals and bring a meagre amount of outside tourists, events such as the NERM have seemingly been ignored for reasons best known to the authorities.
The only help the Arunachal edition of NERM received was from the Public Health Engineering Department seeking to promote a ‘Clean Arunachal’. This would certainly assist the department in spreading the message that Arunachal is striving to become a leader in terms of cleanliness.
And for those who continue to make assumptions that Royal Enfield riders are a “bad influence,” look a little closer: you would be surprised to learn that they are not junkies or potheads but mature people working in dignified fields, who clearly understand the difference between right and wrong, and know their limitations.
Their only sin (if it may be called that) is taking a few days off to indulge in a get-together, and to meet up with members of their extended family of Royal Enfield riders. (Endnote: Most of the riders – over 80 of them – at the NERM this year were from Sikkim, which will host the next edition of the event.)