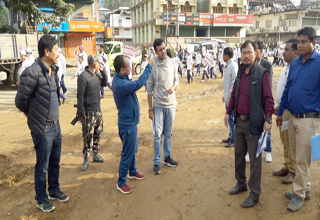 ITANAGAR, Nov 22: Parliamentary Secretary for PWD, UD, Techi Kaso has expressed concern over the slow progress of ongoing construction work of four lane road project in between Chandranagar and Papu Hapa.
Kaso, along with Itanagar-Capital Complex Deputy Commissioner, Prince Dhawan and PWD Highway Executive Engineer, Nani Tath on Wednesday inspected the work site along the NH 415 and also reviewed the eviction drive carried out by the district administration.
Kaso directed the Deputy Commissioner and officials of PWD Highway to expedite the work and emphasized on immediately starting the formation cutting between Itanagar and Papu Nallah.
He suggested the construction agency to put more men and machines to expedite the work, while also stressing on the need to maintain quality work.
He further appealed to the locals to cooperate in the construction work.
The DC also raised concerns over the slow progress of work and directed the officials of T K Engineering to immediately deploy more workers by the 27th of this month.
Officials of T K Engineering have assured to deploy 28 additional machines to expedite work.