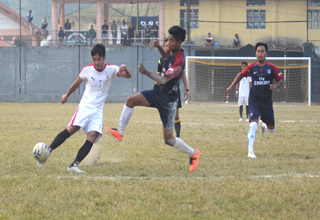 Staff Reporter
ITANAGAR, Dec 13: The group level matches of the 16th Tadar Tang State Level Football Tournament are almost complete and the eight quarterfinalists for the state’s top football event have been decided.
Lower Subansiri and Papum Pare from Group C, Capital Complex and East Kameng from Group A, East Siang and West Siang from Group B and Lohit and Kra Daadi from Group D will battle it out for a spot in the last four.
The quarterfinal matches will be held on 15 and 16 December.
Lohit and Kra Daadi will lock horns with each other in their only, and the tournament’s last, group level match on Thursday. The match will start at 1.30.pm.
On Wednesday, Papum Pare played out a 0-0 draw against Lower Subansiri, while Capital Complex trounced Longding 6-0 in their last group matches.