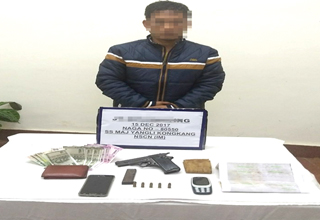 KHONSA, Dec 16: The Khonsa battalion of the Assam Rifles (AR) apprehended a senior NSCN (IM) militant from here in Tirap district recently.
Yangle Kongkang, a self-styled major, was apprehended on the night of 15 December during and operation launched by the AR, informed Kohima-based Defence PRO, Col C Konwer.
The militant was allegedly involved in terrorizing and extorting money from people in the town.
A pistol, ammunition, a small quantity of opium, extortion money, and other incriminating documents were seized from his possession, the PRO said.