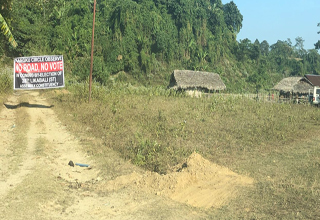 [ Amar Sangno ]
ITANAGAR, Dec 22: They say that abstaining from the electoral process during the by-election to the Likabali assembly constituency on Thursday was the only mechanism left to draw the government’s attention towards Kangku circle – a place they call ‘god’s abandoned foothill’ – in Lower Siang district.
“Our boycott of the by-election was an expression of our anger over the lies and hollow promises made by political leaders and the government for the last four decades,” said Dajo Ngomle, a ‘No Road, No Vote’ campaigner and Assistant General Secretary of the Dolok Bango Welfare Society.
“Every time election comes, we only ask for a road in our area; but we have been given only assurances by the leaders and the government for many years,” Ngomle added.
Kangku circle comprises 24 villages in the newly-created Lower Siang district. Most of these villages are located in the foothills. It has nine polling stations, out of which five were boycotted by the voters pressing their ‘No Road, No Vote’ campaign.
Before this, the people of Kangku circle have taken part in the electoral process since 1978.
On Thursday, each time a stranger came near a polling booth, the campaigners erupted in sloganeering, raising black flags and banners – “Road jima rem, vote jima re (No Road, No Vote)” – hoping that the stranger might be a representative from the government or a press person, so that their ululation could be heard far across.
The area was represented by many great leaders like former chief minister Tomo Riba, Todak Basar (two-term MLA), Rima Taipodia (two-term MLA), Kardu Taipodia (one-term MLA), and Jomde Kena (two-and-a-half term).
It is said the people of the area had invited the then chief minister, Gegong Apang, to Kangku in 1992 and submitted a representation demanding road connectivity. A similar memorandum was submitted to former CM Nabam Tuki during his tenure in 2012, and he announced Rs 40 crore for the project, which never materialized.
The residents have lost faith in the leaders’ assurance, and in the establishment, in terms of the road project.
“We have lost faith in the MLAs, leaders and political parties,” said Upper Borajan ASM, Larming Taipodia, who was guarding a polling booth on Thursday.
Apart from denial and deprivation, the foothill people see road connectivity to their area as a ‘liberator link’, from economic and security perspective.
“The people in the foothill live in constant fear,” said Binjir Bui, an advocate from Balisori village.
“In 1996, a large portion of our land was forcibly captured by people from Assam with the help of forest rangers. We couldn’t retaliate as we have to pass through their villages each time we go out,” Bui added in a helpless tone.
It is said that the residents are being pushed back to the foothills by Assam officials under their ‘forward policy’ – a covert land-grabbing tactic along the interstate boundary which is being allegedly carried out by their forest rangers, backed by the administrators.
“We live without any security. They (Assam) have snatched our cultivation land and are now eyeing our natural resources in the forests. When we retaliate, they harass our people as we have to cross their villages while going out from our own area,” said Dajo Ngomle.
The decades-old deprivation of road connectivity has forced the residents of Kangku circle into abject poverty, whereas it was once considered one of the affluent circles in the Likabali area.
With the polling process in the constituency almost over, Galo People’s Federation President Nyaadar Loya vowed to continue with the ‘No Road, No Vote’ campaign until the government addresses their demand.
Loya expressed resentment that voting took place at four polling stations in Kangku circle, stating that the people at the four polling stations were pressurized by the political parties.
Needless to say, the uproar created by the agitated voters was a testimony to the people’s anger over decades of denial and being deprived of their basic right.
If the voice this time was not loud enough to reach the establishment’s ears, the residents of the circle have threatened to launch a ‘voter cards surrendering campaign’ soon, as a last resort.
It is to be hoped that the government at the Centre and in the state will not wait for that episode to unfold.