ITANAGAR, Dec 24: In a major boost to Chief Minister Pema Khandu’s leadership, the Bharatiya Janata Party (BJP) has won the Pakke-Kessang and the Likabali Assembly seats that had gone to by-polls on 21 December.
BR Waghe of the BJP won the Pakke-Kessang seat by a margin of 475 votes, defeating his lone rival and former deputy chief minister Kameng Dolo of the Congress.
While Waghe polled 3,517 votes, Dolo bagged 3,042, Joint Chief Electoral Officer DJ Bhattacharjee said.
In the Likabali seat, the BJP’s Kardo Nyigyor won by 305 votes, defeating his nearest rival Gumke Riba of the People’s Party of Arunachal (PPA).
While the BJP candidate polled 3,461 votes, the PPA nominee secured 3,156 votes in the constituency, which witnessed a multi-cornered contest. 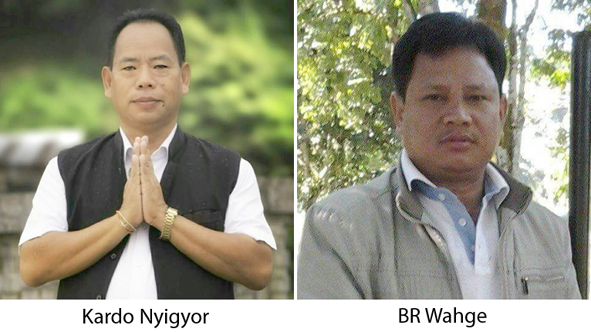 Congress candidate Modam Dini could secure only 362 votes while Independent candidate Sengo Taipodia bagged 375 votes.
The constituency also saw 23 voters opting for NOTA, Bhattacharjee said.
Over 68.5% electors had cast their votes in the by-polls, with Pakke-Kessang recording an 86% voter turnout and Likabali 51%.
With this win, the 60-member state Assembly now has 49 BJP MLAs – nine from the Peoples’ Party of Arunachal (PPA), one Congress, and one Independent legislator each.
The Likabali seat had fallen vacant after then health and family welfare minister Jomde Kena passed away on 4 September.
The Pakke-Kessang seat fell vacant after the Gauhati High Court declared the election of Dolo from the constituency in the 15 March, 2014 polls null and void, following an election petition filed by his rival Atum Welly.
Meanwhile, Chief Minister Pema Khandu termed the victory a perfect Christmas gift to the party, the state government and the Centre as well.
Congratulating the people of both the constituencies for reposing faith in the BJP by giving the mandate to its candidates, Pema assured to reciprocate the gesture in the truest sense.
He also congratulated Waghe and Nyigyor, and expressed confidence that they would live up to the expectations of their respective electorates and become inalienable assets for the party.
Pema reiterated that the by-elections were fought by the party on development and clean governance plank – the sole objective of the BJP since it formed the government in the state – which was well received by the electorates.
Union Minister of State for Home, Kiren Rijiju,congratulated the BJP members for the victory in the by-polls. (With inputs from PTI)