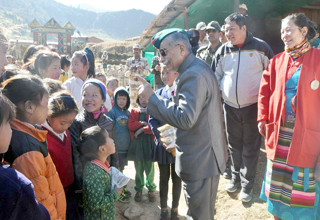 DAPORIJO, Jan 12: Governor Dr BD Mishra on Friday visited Taksing, one of the remotest border areas in Upper Subansiri district.
Interacting with the locals, the governor said that development would come to every corner of the state “through the model village programme.”
He advised them to explore avenues for self sustenance through improved farming, horticulture, cattle rearing, dry fruit plantation, etc, and suggested carrying out soil testing in border villages to assess the possibility of growing walnut and pine nut.
“Some European countries have developed hybrid varieties of walnut, which will be very beneficial for the villagers as it starts giving fruits within 4 years of plantation,” Dr Mishra informed.
He informed the local youths about the Army recruitment rally being held in Likabali in Lower Siang district from 5-8 February, and exhorted them to join the Indian Army.
The governor also urged the women to come forward for socioeconomic development of the area.
He awarded Rs 5000 each for the ‘best Swachhata Abhiyan organizer’, the ‘best house frontage’, and the ‘best shop frontage’.
The governor also interacted with the security personnel stationed at Taksing.
“The people of the state and nation have a peaceful sleep because of your alertness,” he told them.
On his return from Taksing, the governor met HoDs, panchayat members, gaon burahs and gaon buris in Daporijo.
“With concerted effort of the government and the people, you must harness the local potential and become self sufficient,” he said.
The governor said that the development plans and programmes must be based on transparency, accountability, continuity, audit, and review for mid-course corrections.
He also urged the people to review their concept of land compensation, which has become a bottleneck to the development process.
Later the governor visited the district hospital here and interacted with the patients and medical officers. PRO