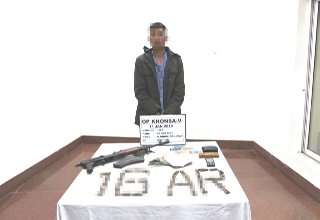 KHONSA, Jan 12: The Khonsa battalion of the Assam Rifles apprehended one Manhua Wangpan, a self-styled Sergeant Major of the NSCN(R), from here on 11 January.
Based on a specific input, the battalion launched a joint operation in conjunction with the police, and apprehended Wangpan.
An AK-56 assault rifle, live ammunition, extortion note, opium, brown sugar, Rs 5000 of extortion money, multiple debit and credit cards, and other incriminating evidence were seized from his possession.
On interrogation, the insurgent admitted to being an active part of the banned outfit since 2015. He revealed that he was part of a nine-man team operating under self-styled Captain Eli Ketok and had come to Khonsa town for collecting extortion money on his instructions.