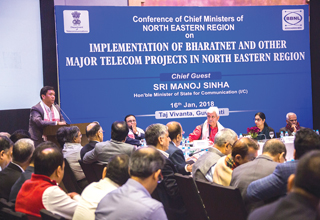 GUWAHATI, Jan 16: Chief Minister Pema Khandu has told private telecom operators that the Arunachal Pradesh government will incentivize them for setting up facilities in sparsely populated districts and villages – especially in the borders – and in the insurgency-affected districts of Tirap, Changlang and Longding.
“The incentives shall be in the form of cross-subsidization of land rates for towers at other places,” Pema informed during a review meeting for implementation of BharatNet and other major telecom projects in the Northeast, which was chaired by MoS (Independent) for Communications, Manoj Sinha.
Pema emphasized on a robust telecom infrastructure in the Northeast as a prerequisite to the development of the region, and also as catalyst to attract investment in the region.
“The IT sector will play a major role in achieving the Prime Minister’s Vision for New India by 2022. For that we need a robust communication network,” the chief minister said, and urged all the NE states to resolve issues of RoW, land for mobile towers, etc, to facilitate telecom projects in the region.
He thanked the union minister for calling the meeting at Guwahati for resolving issues regarding telecom projects in the NE region.
He informed that Arunachal Pradesh will soon implement the three-tier coordination system in the state, which will function at three different levels – the deputy commissioners’, the IT secretary’s, and the chief secretary’s – for implementation of telecom projects in the state.
He appreciated the union ministry’s decision to dedicate a nodal officer of the DoT for liaising between all the telecom projects with state governments and coordinating with various agencies, such as BSNL, TCIL, and RailTel, among others.
The chief minister said the 2G network provided by the installed towers have become outdated, and requested the union minister for a change in technology to 4G.
He thanked Sinha for approving the setting up of 1893 towers in Arunachal Pradesh under the Comprehensive Telecom Development Plan for Rs 1739 crore, to cover 2805 villages and 149 towers for national highway coverage.
He thanked the union minister for assuring to provide satellite media connectivity through VSATs in all gram panchayats, and for giving the go-ahead for overhead installation of optical fibre cables, as it is being affected by road widening works.
He also expressed appreciation for the launch of the Asthamangal project implemented by the BSNL to provide alternate bandwidth to all state headquarters. Under this project, Itanagar will get connectivity through PGCIL of 120 Gbps.
The chief minister further informed that to support and facilitate establishment of telecom projects in the state, the state government will bring out a Right of Way policy for all roads managed by the state and central governments, local bodies, and PSUs.
He also informed that the state government will have a mobile tower policy in place to facilitate land for mobile towers.
Assam IT Minister Keshav Mahanta, DoNER Secretary Naveen Verma, DoT Secretary Aruna Sundararajan, and IT Secretaries of all NE states also attended the meeting. (PRO to CMO)