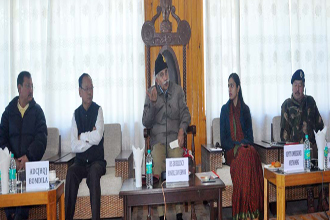 BOMDILA, Jan 16: Governor Dr BD Mishra called upon the district departmental heads to ensure that all the development projects and welfare programmes are implemented in letter and spirit within the stipulate time.
“The government officials are the vehicles for multi-sphere development. They must ensure absolute transparency, accountability, continuity, review and audit and midterm correction in implementation of all programmes and projects. These will guarantee that benefits of any initiative of the Central and State Governments reach to the targeted population,” the governor said while interacting with the HoDs of West Kameng district here on Tuesday.
Carrying the message of Swachh Bharat, the governor appealed to the officials to take lead in keeping the district, clean, healthy and plastic free. Sharing his experiences in the state capital under the theme, ‘Hamara Elan Swachhta aur Nari Utthan,’ the governor said that to realize the Swachh Bharat, they have to have change in mindset.
Reiterating the importance of tourism for the socio-economic development of the state, the governor appealed to the people through the government officials to promote the spirit of ‘Atithi Devo Bhavo’ amongst the local populace.
Stating that connectivity and communication are important for the state to progress, the governor asked the officials to prevail upon the people and tell them that exuberant land compensation for road and other infrastructure has become a bottleneck for development.
The governor also visited the district hospital and the government college here.
During the visit, he interacted with medical officers and patients and lecturers and students respectively.
He advised the Principal and lecturers of the college to motivate the students to join armed forces and strengthen the NCC in the college.
At the district hospital, the governor inaugurated a two-day Swasthya Parikshan Camp conducted under North East Plan of CCRS, Ministry of Ayush.
He also visited various wards, including ‘Jan Aushadhi’. Along with his wife Neelam Mishra, the governor distributed fruits to the indoor patients.
In Dirang, the Governor interacted with the panchayat members and gaon burahs of the circle, and described them as the pillars for the development of the society.
“They have the onerous responsibility to ensure optimum utilization of funds allocated for development projects in their areas,” he said, and reiterated that they must participate in the development process of the state by ensuring transparency, accountability, continuity, review and audit, and midterm correction.
The governor also appealed to the panchayat members and gaon burahs to motivate children to join the Army, underscoring that the youths from the state “will be homegrown soldiers, as they are sentinels by birth.”
He also spoke on empowering women to be partners in the development process, and advised the people to enthusiastically participate in the Swachh Bharat Abhiyan.
Later, the governor met the scientists of the National Research Centre for Yak here. He lauded their work and advised them to transfer the research work to the field so that the local population may benefit from it.
Director Dr P Chakravorty briefed the governor about the research centre.
The governor also visited the National Institute for mountaineering and allied Sports (NIMAS), where NIMAS Director Col Sarfraz Singh briefed the governor about the institute. Trainees also demonstrated their mountaineering skills for the governor.
Mishra and his wife also met members of the Indo-Bhutan Rafting Expedition-2018 team, who will be participating in the rafting expedition in the Kameng river.
Before returning to Bomdila, the governor also visited the Regional Sheep Breeding Farm at Sangti. (PRO to Raj Bhavan)