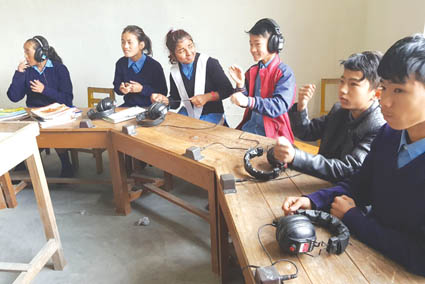 ITANAGAR, Feb 1: The Donyi Polo Mission School for the Hearing and Visually Impaired may soon be upgraded to the higher secondary level, if the government considers its proposal.
Established in 1990 by former chief minister Gegong Apang as founder chairman, it is the lone school in the state which caters to the educational needs and personality development of children with hearing and visual impairment.
The residential school started out with three hearing impaired children on 15 October, 1990, and opened its doors to the visually impaired on 22 December, 2008.
It currently has 105 children and caters to all their requirements free of cost. The school does not charge a single rupee for food, tuition, or books, and even provides toiletries and other basic essentials to all its students. The only requirement the students have to fulfill on their own is to arrange their school uniforms.
The school offers a range of activities and skill training programmes to prepare its students for a better future.
The school is truly living up to the Right to Education Act and encouraging its students to pursue their studies and improve their abilities.
However, founder teacher and now school principal, H Sharma informed that most children in the school are from far-off districts and are economically constrained.
Informing that the school had its very first batch of visually impaired children pass their class 10 board examinations very recently, he said that, after completing their secondary level education, many children have to either pursue further education in Meghalaya or Assam, or put a complete halt on their education.
Speaking to a few children on the campus, we found that, while they would like to explore new opportunities, many would prefer to pursue their education in the state, as it gives them a sense of security.
To find a solution to this impediment, Sharma, along with the school board recently placed a request to the Government of Arunachal Pradesh to upgrade the school to the higher secondary level.
Planning Secretary Dr Joram Beda informed this daily that the file has been forwarded to the Finance department for consideration.
The principal informed that the proposal for roughly Rs 41 lakh includes fund for salaries for senior teachers and basic requirements of the children – both of which would eventually increase if the school is upgraded.
“We have the required infrastructure to house teachers and more students, which is why we have kept the proposal amount realistic, instead of asking for more than what is required,” Sharma said.
The school currently has 14 teachers, of which nine are trained in special education.
Sharma also informed that it is often difficult to find a teacher who has a Master’s degree or BEd and at the same time is trained in special education, especially when the school still follows the 6th Pay Commission.
“We would have more teachers with training in special education if the government paid salaries at par with the regular teachers, if not more,” he said.
The school currently operates with the interest amount that accrues from the Rs 5 crore corpus fund provided by former chief minister Dorjee Khandu. Chief Minister Pema Khandu later added Rs 2 crore to the fund in 2016.
The nodal department which looks after the needs of the school, the Social Justice, Empowerment & Tribal Affairs (SJETA), also gives an annual fund of Rs 50 lakh to the school.
All the requirements of the school are approved by the Papum Pare deputy commissioner, who is the official secretary of the school.
SJETA Director Yumlam Kaha informed that the department is doing whatever is possible, “according to norms,” to see to it that the school functions smoothly. He expressed hope that the government would consider its proposal for an upgrade.
Of the 98 hearing impaired students that passed out earlier, a little over 60 of them are currently in government jobs. While the number may be satisfactory, it also paints the grim picture that there is little option for the differently-abled, especially those who are hearing or visually challenged.
Arunachal Pradesh is home to 26, 734 differently-abled persons, of which 9665 have hearing or speech impairment, while 5652 are visually impaired.
This 2011 census gives us an estimate that nearly 60 per cent of those differently-abled persons have some form of visual or hearing and speech difficulties. These numbers also suggest that about two per cent of the total population of the state is differently-abled.
“Even if they are only two per cent of the state’s population, they are part of Arunachal, and the government should give serious thought to their education and personality development,” adds Sharma.