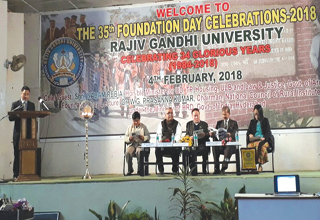 Guide the state to control mushrooming of private universities: Rebia

Staff Reporter
RONO HILLS, Feb 4: Urban Development Minister Nabam Rebia has called on the Rajiv Gandhi University (RGU) to play a role in guiding the state to control the mushrooming of private universities in the state. He was speaking at the 35th foundation day of the university here on Sunday.
He said that there was no need for so many private universities which have ended up as certificate churning institutes.
Educational quality is being compromised and the quality of schools has also been drastically affected because of untrained teachers, he said.
Regarding renaming the RGU back as Arunachal University, Rebia said that change of name is not too important.
“We keep changing names, whenever there is change of power at the Centre,” he said, adding that it is upto the university to decide.
RGU Vice Chancellor, Prof Tamo Mibang said the idea of the university is to promote academic excellence with quality faculty and infrastructure, and to promote academic environment.
When these two merge, the university will excel, he said, and added that the university is on the right track.
“Being in the interior, we must realize our strengths and weaknesses,” he said, predicting a bright future for the state.
He called on all to make use of the facilities that the university has to offer. He further informed that there are more than 70 research works ongoing in the university.
Prof Mibang said that the occasion was a moment to pay respect to students, teachers, administrators and non-teaching staff of the early days, who experienced the trails and tribulations of bringing up the university.
He said that the university started with five rooms in what is now the Public Service Commission office.
In 1988, it was shifted to Rono Hills. “In the last 34 years, the university has taken revolutionary steps,” he said.
Dr WG Prasanna Kumar, chairman of the National Council of Rural Institutes, Ministry of Human Resource Development, who gave the foundation day lecture on ‘University-community partnership: A need and a reality’, said that university-community access points are to be identified and the process of partnership facilitated.
He said social and technical aspects relating to natural capital formation, which includes plantation, water and energy conservation, as well as waste management, are the best areas to start with for university-community partnerships.
Dr Kumar added that higher education institutions will have to play a transformative role in rural development by contributing to building resilience against disasters like flashfloods, heat washes, cold waves, droughts and fires (including farm fires), taking into consideration the United Nations’ goals.
Calling for giving back to the communities, he said there was a need to reestablish the relevance of the universities to the state and the civil society, especially in the rural areas.
The event was also addressed by RGU Registrar Prof Tomo Riba, Head of Education Department Prof Elizabeth Hangsing, and Joint Registrar (Academic) Dr David Pertin.
Dr Pertin said that the time of celebrations is the right occasion to reflect back on the past glories and to draw strength to move forward.